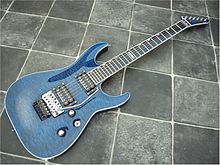 Superstrat refers to an electric guitar design that has been widespread since the 1980s , which is based on the Fender Stratocaster electric guitar model , which has been manufactured since 1954, was made popular mainly by Jackson Guitars and which is specially tailored to the tonal and technical needs of rock music guitarists is.

In the late 1970s and early 1980s, some rock guitarists modified their Stratocaster guitars to bring them closer in sound and playability to the possibilities offered by hard rock guitarists in bands popular at the time, such as Van Halen and Quiet Riot were demonstrated. The most common modifications were, in addition to deep indented cutaways and correspondingly more frets, the replacement of the single-coil standard used Singlecoil - pickups of the Stratocaster by doppelspulige Humbucker -Pickups renowned manufacturers ( Seymour Duncan , DiMarzio ), and the installation of Floyd Rose -patentierten Tremolo - Systems. The latter enable a degree of tuning stability of the strings that is hardly achievable with other tremolo systems, even with extreme manipulation of the tremolo lever - the extensive relaxation of the strings at full volume of the guitar amplifier and their immediate re-tensioning into the correct original string tuning. This technique is similar to the generated siren sound effect commonly known as "Dive-Bomb" called (mutatis mutandis " fall bombs " ). In addition, the settings of the tremolo block and neck angle were usually coordinated in such a way that a particularly flat string position was achieved, which favored the playing techniques of the time.

Traditional electric guitar manufacturers such as Fender and Gibson tried to react to this development with their own appropriately equipped models, but were only able to achieve little economic success. Popular manufacturers of superstrats include Jackson Guitars , Charvel , ESP , Kramer , BC Rich , Ibanez and Hamer. An example of a superstrat is the Ibanez JEM electric guitar model, which has been manufactured since 1987 .