The company was founded on June 1, 1977 by Claus Thien and Udo Heyenga in Bremen and initially took over ships from the bankruptcy assets of the shipping company Schulte & Bruns AG in Bremen, which went bankrupt in 1977, and Naber Schiffahrtsgesellschaft mbH in Bremen. In the same year a branch was established in Leer . 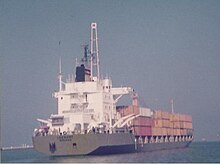 The company dealt with the ship management and the chartering of seagoing vessels. Thien + Heyenga Leer GmbH , which has been independent since January 1, 2001, is responsible for the crew management of the ships .

About 500 seafarers were employed on board. The company's fleet consisted of 37 of its own full container and refrigerated and multi-purpose ships with a total carrying capacity of around 585,000 tons. In addition, the company has been looking after other Projex Schiffahrtsgesellschaft ships since 1987 (currently 19 units).

On April 1, 2014, the MPC Group took over Thien & Heyenga together with the Ahrenkiel shipping company based in Hamburg and Bern. The operations of the two companies taken over were brought together under the new name Ahrenkiel Steamship .