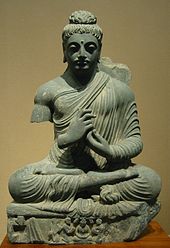 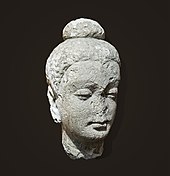 Head of the Buddha with a Ushnisha , Hadda, Afghanistan (3rd century)

The Ushnisha ( Sanskrit , n., उष्णीष , uṣṇīṣa ) is an elevation on the back of the Buddha's head . She symbolizes his wisdom and his openness as an enlightened being.

The ushnisha was not described from the beginning in the "physical characteristics of the Buddha" emphasized by the Buddhist canon. Instead, a topknot is mentioned several times:

The first representations of the Buddha in the 1st century AD in the Graeco-Buddhist art of Gandhara show him with a topknot instead of a hump of his skull. It is believed that the interpretation of the ushnisha as a supernatural hump of the skull came about at a later date, when the representation of the hair knot was more stylized and its original meaning was lost. (Mario Bussagli, «L'art du Gandhara»).

The ushnisha is more or less pronounced in the various Buddha images; in rare, mostly modern cases, it is completely absent. In crowned Buddha images, it is hidden behind the crown. In (South) East Asian art it is often pointed.

Some Tirthankara depictions in Jain art also show a similar elevation on the back of the head.