Ribbed vault of the church

Vendel (Swedish Vendels socken ) is a parish ( socks ) in the municipality of Tierp in the north of the historic Swedish province of Uppland .

It is known for its medieval church and for prehistoric and protohistoric traces.

The parish church of the parish is a Gothic brick church . The vaulted single-nave church was built in the late 13th and early 14th centuries. 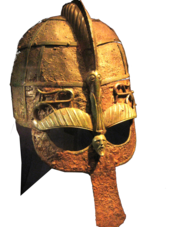 Helmet from one of the graves of Vendel

Fifteen boat graves were found near the church, dug between 550 and 800 years. After them, this period is called the Vendelzeit in Swedish archeology . It corresponds in time to the Early Middle Ages in Central Europe, but since Scandinavia was not yet Christianized at the time , it is also assigned to the Iron Age .

Not far from the boat graves is the Ottarshögen ( Ottarshügel ), which contains a grave that is probably dated a little earlier.