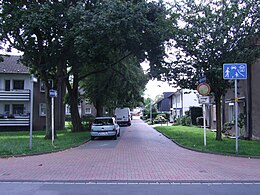 A traffic-calmed area , colloquially often also called play street , less often residential street and also known as residential road , is a street or traffic area in Germany that is signposted with traffic sign 325.1 . The area is used for traffic calming in built-up areas . The first model projects have been implemented since 1977. The official introduction to the StVO took place in 1980.

The following applies within this area:

When driving out of a traffic-calmed area, a risk to other road users is to be excluded according to § 10 StVO . As when driving out of a property, you have to wait for all other road users, right-before-left does not apply. According to the case law of the Federal Court of Justice, this is even the case if up to 30 meters have to be covered between the traffic sign "End of the traffic-calmed area" and the main road.

The marking of traffic-calmed areas presupposes that the roads in question, in particular through speed-reducing measures by the road construction agency or the road construction authority, have a predominantly residential and development function. This means that the traffic-calmed area must be structurally designed in such a way that the typical character of a street with a lane , sidewalk and bike path does not prevail. As a rule, this is achieved by leveling expansion (paving), planting beds, mutual parking spaces, plateau paving and constrictions (see also shared space ).

Controversial are cost "locks", such as speed bumps , ramp bricks and concrete - planter . They affect the overall visual appearance and can be dangerous for cyclists , the elderly and disabled people and hamper emergency vehicles.

Through traffic and trucks -Transport are not forbidden to the traffic-calmed area is thus not a neighboring street. In order to keep through traffic out of the areas or streets, the following measures can also be taken:

Related concepts are the residential street in Austria, the meeting area in Switzerland, France and Belgium and the traffic-calmed business area in Germany. In contrast to the traffic-calmed area, where you can only drive at walking speed and motor vehicle drivers and pedestrians have equal rights, the following apply:

In contrast to all of the above concepts, the play street is closed to vehicles of all kinds.