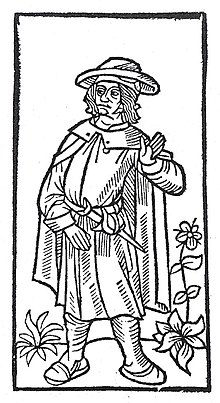 Villon ( English A Lodging for the Night ) is a short story by the Scottish writer Robert Louis Stevenson . The episode from the life of the poet François Villon was published in 1877 as the author's first prose text in the British literary magazine Temple Bar and in 1882 it was included in the New Arabian Nights short story collection .

Villon, living in the midst of Parisian crooks, crooks, thieves and murderers, also considers himself a “black villain”, but does not allow himself to be beaten down.

Snowy Paris in November 1456: In a small house near the Saint-Jean church, Villon is composing the "Ballad of the Fried Fish". His cronies Montigny and Thevenin Pensete enjoy gambling. Montigny loses and stabs Thevenin. The perpetrator distributes the dead man's money to the other crooks loitering in the house. Before they leave the house in Montfaucon for fear of the gallows , they steal Villon's wallet.

Villon, looking for a place to stay for the night, goes into a half-ruined house and steps on a dead whore in the dark. Villon doesn't want to stay in such a company at any cost. At his adoptive father, the chaplain of Saint-Benoît, he knocks, whimpering, in vain. Villon can hardly expect pity from other people, for example from old friends. He vilified, betrayed and beaten her. The good mother would have been the salvation. If only he knew where she lives.

He still has a house. There it will be opened to him. Mistake. At his knock, a bucket full of rinse water soaks the trousers. The freezing clothes will kill him, Villon fears. He has to break into the nearest suitable house of a rich man. No, he knocks and luckily the door is opened to him. The master of the house - that is none other than Engelram von Feuillée , Herr von Brisetout, bailiff of Patatrac - recognizes the nocturnal troublemaker as a thief and still entertains him. Villon is allowed to dry his trousers by the fireplace and speak to the wine, but has to listen to the Count's moral sermon. When the talk of the soldier's battle in the field of honor becomes too colorful for Villon, he contradicts the veteran knight. Soldiers - so Villon - are worse than a single Parisian thief. He stays there. The night passes over the argument. Villon thanks for the roast mutton. The count releases his guest into the cold of the morning.

Wikisource: A Lodging for the Night  - sources and full texts