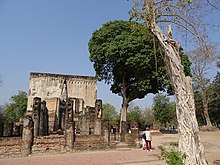 View of Wat Si Chum from the east

Typical of the Sukhothai style: the hand of the Phra Achana in Wat Si Chum

Wat Si Chum is part of the Sukhothai Historical Park , it is located northwest outside the Old City (Mueang Kao - เมือง เก่า ) of Sukhothai.

The massive Mondop , a cube-shaped building in the middle of the complex was built by King Maha Thammaracha II towards the end of the 14th century . In it, a large sedentary is Buddha statue in the Bhumisparśa- mudra ( "Overcoming of Mara "), which is about 11 feet wide and 15 feet high. This figure is probably Phra Achana , who was mentioned in a stone inscription, the so-called "Inscription I.", by King Ram Khamhaeng . It is the largest surviving Buddha image in Sukhothai. The Buddha seemingly peering through the narrow opening of the temple, as well as his elegant, pointed hand are among the most popular postcard and photo motifs in Old Sukhothai.

The Mondop has a square floor plan with a side length of 32 meters. It is 15 meters high and its walls are 3 meters thick. In the southern wall there is access to a narrow staircase that leads to the roof. In this passage, more than 50 slabs of slate were discovered, on which images from the life of the Buddha ( Jataka ) are engraved. They are the oldest surviving examples of Thai drawing. Although these plates were originally in a different location, it is now believed that ritual circling (or here climbing the steps) can be seen as a symbolic ascent to Buddhahood. Originally the Mondop probably had a wooden monopitch or gable roof .