A wind generator , also known as a small wind turbine system (KWEA), is a mostly industrially produced wind turbine with a low output for generating electrical energy . Areas of application include self - sufficient self - supply in remote areas and in the field of sustainable energy generation. 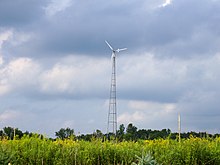 Wind generators on a house

Wind generators at Cormainville in France

The demarcation to larger wind turbines (WKA) is fluid and there are different definitions for small wind turbines from a few kilowatts up to a maximum of 500 kW nominal power. The Federal Association of Small Wind Turbines is striving for a definition agreed in Europe according to the following classification:

"Small wind turbines are wind-driven systems with an area exposed to wind of up to 200 m²", described in the draft standard EN 61400-2. This corresponds to a rotor diameter of around 16 meters.

The standardization includes house systems on the roof or directly connected to the house as ancillary building adapted to the building without size restrictions. They are used for self-sufficiency up to and including 6 kW nominal power. In addition, the standard classifies micro wind turbines with a maximum of 1.5 kW rated power or 6 m² of wind attack area.

The building law speaks of "house wind auxiliary system" if the system is in the immediate vicinity of a building and serves its own supply.

In the case of wind generators, there are also more often designs that differ from wind power plants, with more rotor blades (quieter due to lower high speed ) or other basic principles, such as vertical rotors .

With regard to security of supply, wind generators can also be coupled with other energy sources such as photovoltaic systems or diesel generators . With the help of inverters , the generated electricity can also be fed into the public grid, but in Germany the Renewable Energy Sources Act (EEG) does not provide for an increased remuneration rate for electricity from small systems.

Small wind generators are also occasionally used on sailing yachts to provide electrical energy for lights, radio systems and other electrical devices on board.

On board the airship LZ 127 "Graf Zeppelin", a wind generator on the nacelle provided electrical energy for the radio system, because electrical lines from the motor nacelles would have been risky (hydrogen). There is a similar use as an emergency system for jet aircraft that have an adjustable ram air turbine that is driven by the airflow .

There are basically two types of generators for small or micro wind systems on the market. Three-phase generators are mostly maintenance-free, on the other hand, in direct current generators, the carbon brushes must be replaced at regular intervals . Three-phase generators have the additional advantage of being able to easily control the wind turbine, e.g. B. Brakes for maintenance purposes. Inverters with an integrated energy management system for controlling energy generation and energy distribution control one or more wind generators.