The Wind Horse is in the shamanistic traditions of Central Asia an allegory for the human soul . In Tibetan Buddhism it was adopted as the central element in the middle of the four allegorical animals of the cardinal points. It also gave its name to the prayer flags on which the five animals are depicted.

The symbol has different, slightly different names depending on the language:

The origins of the wind horse lie in what is now Mongolia as part of Tengrism and in Tibet in the Bon faith.

The Mongolian-Turkish legend tells of a magical horse that was born as a foal with eight legs and the ability to fly. The wind horse was the spiritual child of a shaman named Chichek and was supposed to help her escape the rule of an evil khan. This only succeeds after his death, when in Chichek's trance it reappears as a real horse and carries her away. In Mongolian depictions, the wind horse is usually shown with wings.

Chiimori stands for the inner strength of a person, his soul. This force helps the balance between Father Sky (alttürk. Tengri ; mong. Tenger ) and mother to find Earth. Good deeds strengthen the soul and its strength. Every act that disturbs the balance of the world causes the inner strength to wane. Tengrism thus explains that bad people often develop self-destructive behavior over time. 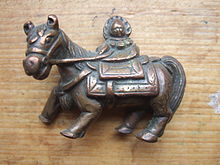 In Tibetan Buddhism, the same symbol was adopted from the shamanistic belief of Bon . Here it appears in the company of the four animals of the cardinal points ( Garuda or Kyung, dragon , tiger and snow lion ), which in turn come from Chinese mythology .

In this context, the wind horse is usually depicted without wings, but it wears the three jewels of Chakravartin , also called the "wish-fulfilling jewel". It is said to spread peace, prosperity and harmony when it appears. The ritual invocation of the wind horse takes place in the morning and when the moon is waxing through a smoke offering.

The corners of the Tibetan prayer flags usually show the four animals of the cardinal points and the wind horse in the middle. From this the flags have also taken the name rlung-rta . By flapping in the wind, they transport the prayers to heaven like the horse flying in the wind.

The windhorse is a common figure in heraldry . It is a rare heraldic animal and actually not found in coats of arms in European heraldry . His position is heraldic left and floating (flying) in the coat of arms. It has wings and is heavily stylized. It is known from the coat of arms of Mongolia . In Europe it is to be equated with the wing horse or Pegasus .