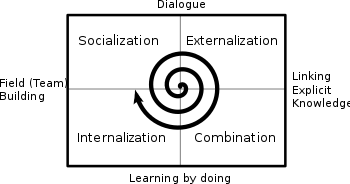 The spiral of knowledge

A transfer of knowledge and the associated change in knowledge can take place either on an individual or on an organizational level. This represents a transition from individual to collective knowledge. The model, which contributed significantly to the development of knowledge management , was developed by the two Japanese scientists Ikujiro Nonaka and Hirotaka Takeuchi .

Differentiation between implicit and explicit knowledge

The distinction between implicit and explicit knowledge (see the table below) can be traced back to the scientist Michael Polanyi . Through an interaction of the two types of knowledge with the environment and the organization, new knowledge can be created. This process, the creation of new knowledge, can be illustrated using the knowledge spiral.

Nonaka / Takeuchi distinguish the following 4 forms in their work: 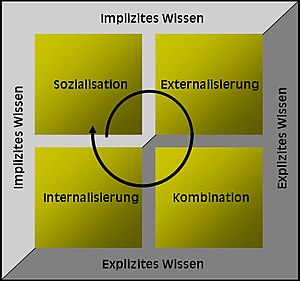 All of these processes interact with and with each other and thus form a spiral. The knowledge that is created in the four forms is different in each case. In order to understand this model correctly, it is necessary to realize that innovative knowledge can only be created for an organization if the transitions between explicit and implicit knowledge are integrated, promoted and communicated in the organizational processes.

The knowledge that is created through this transformation is different in each case:

The meaning of Ba in the context of the knowledge spiral

The term Ba is another important aspect in the transformation of knowledge and means something like space, place or place. It is a mental (e.g. shared experience), virtual (e.g. email) or physical (e.g. office) space that is shared by several people. A combination of the three forms is also possible. By reflecting on one's own actions or experiences, new knowledge is generated. This concept originally comes from the Japanese philosopher Kitaro Nishida . The essential distinction between human actions and the concept Ba lies in the creation of knowledge. This arises through an interaction in the "shared ba" (shared ba).

Here, too, 4 types can be distinguished that correspond to the model from Nonaka / Takeuchi:

Possible criticism of this model

Embedding in the model-theoretical scheme LIR

The LIR scheme developed by Rainer Born (Institute for Philosophy and Philosophy of Science at the Johannes Kepler University Linz ) shows how communication can function in a simplified form as a meta-model. Linguistic and non-linguistic elements are brought together here. The cycle begins with observing the incident. This is followed by an evaluation of the facts, then plans and decisions are made, which are then finally implemented in concrete actions. An essential feature of this scheme is that you can step out of the system and thus a search for alternative possible solutions is possible.