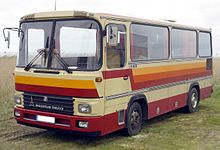 Discontinued buses like this Magirus-Deutz R81 can be converted into residential buses.

A Wohnbus is a self-developed mobile home , which mostly on decommissioned buses or trucks based.

While buses have a rear engine that is advantageous in terms of noise and often the luxury of comfortable air suspension, they are problematic because the many glass surfaces cause thermal problems depending on the season. Elaborate cladding or the replacement of glass surfaces with better insulating materials is then often necessary. An exception are decommissioned buses with a special factory structure, for example book buses , X-ray buses or prison buses , which, however, are offered relatively rarely. A weak point in almost all older buses is the corrosion of the mostly self-supporting bodies , which presents many hobbyists with very complex tasks.

On the other hand, decommissioned trucks are usually inexpensive to buy. Emergency vehicles from various state or public organizations ( Deutsche Bahn , fire brigade , THW , DRK , military or others) are preferred because they are usually in a very good condition due to being housed in a garage and little mileage. As they get older, trucks have fewer static problems due to their more stable construction (steel frame). However, living is always dependent on the so-called "standing height". However, this is often not the case with emergency vehicles used by the military and rescue services, or they are flatbed vehicles that first have to be fitted with a habitable attachment (e.g. caravans whose chassis has been removed). "Furniture cases", ie former furniture vehicles or refrigerated vehicles, are very popular due to their standing height and existing insulation.

Delivery vans and vans from VW buses to large-format minibuses and panel vans are, however, the most common representatives of self-built camper vans. Compared to trucks, they are cheaper to buy and maintain, faster and more manoeuvrable, and they take up less space when parking and camping . Also because the new driving license regulations mean that fewer and fewer people are allowed to drive a larger vehicle ( from 3.5 tons gross vehicle weight ) with the usual car driver's license.

Apart from the latter class, motorhomes are often larger than motorhomes from the factory and can therefore be equipped with off-the-shelf furniture . If not in accordance with the law, coal or wood stoves are occasionally installed. In addition to the pure travel purpose, a philosophy of mobile and free life has established itself among many, mostly young owners, some of whom also like to call themselves " freaks ", as is typical of the scene . (See also Wagenplatz ). However, this trend has since slowed down considerably. This is also caused by today's restrictive driving license regulations and the motorhome taxes , which have risen sharply since December 2006 . It had its heyday in the 1980s and 1990s.

Another group of RV owners are adventurers who travel to desert and jungle regions with converted or factory-fitted four- wheel drive and habitable trucks .