Emaki scene from The Tale of Prince Genji , 12th century 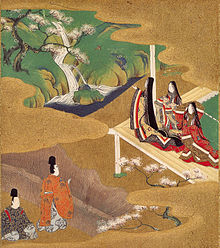 Scene from The Story of Prince Genji according to Tosa Mitsuoki , 17th century

Yamato-e ( Japanese 大 和 絵 ) only refers to painting from the Heian period (9th to 12th centuries), the aesthetic art of the early medieval feudal period in Japan. Yamato-e found its second heyday in the Tosa school of the 13th century and can be traced through the entire history of Japanese art from then on .

The painting of Yamato-e was in contrast to Kara-e , the Chinese painting , the practice of which was not possible without studying the classical Chinese models.

Yamato-e first appeared on adjustable screens ( Byōbu ) and on paper-covered sliding walls ( Fusuma ). The visual art on them was essentially limited to two themes: Shiki-e and Meisho-e, i.e. the representation of the four seasons with the associated festivals and the representation of famous places. With the Shiki-e nature was in the foreground, with the Meisho-e human events. A third variety of Yamato-e were scrolls and picture books ( Emaki and Sōshi-e). Novels and legends were illustrated, the most famous examples being the Genji-Monogatari-Emaki, the Shigan-Engi-Emaki and the Ippen-Shonin-Eden.

In contrast to the strict Sumi-e , the Yamato -e tends to have multiple sequences of scenes, often with historical references, full of events and people, and is therefore similar in structure to Japanese syntax. The Yamato-e mirrored the life of the nobility in the feudal period and the glorious deeds of the samurai in the Kamakura period, and in its current varieties ranges from the representation of the here and now in Japan to colorful abstractions.