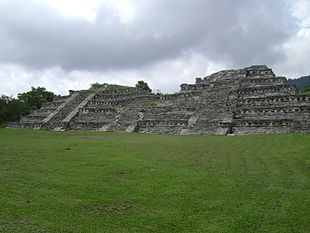 Yohualichan is a Mesoamerican place of worship of the Totonaks near the city of Cuetzalan in today's Mexican state of Puebla . The original name of the site is unknown, the Nahuatl name Yohualichan means 'house of night'.

The archaeological site of Yohualichan is located on a hill about 700 m above sea level. d. M. and about 8 km north of the city of Cuetzalan del Progreso. The distance to the coast of the Gulf of Mexico is about 65 km as the crow flies; the Totonak cult center of El Tajin is approx. 50 km to the north.

Yohualichan was probably established at the beginning of the classical period , i.e. H. around 200 AD, founded and abandoned in the post-classical period (around 1200). At the beginning of the Aztec dominance over the region, around the year 1475, the place of worship was largely abandoned. It was only rediscovered by archaeologists in the 1920s and uncovered, restored or partially reconstructed between 1978 and 1996.

The ceremonial center of the former city, located at the highest point of a slight rise, is grouped around a rectangular square and consists of several temple pyramids , the largest of which is a twin building. The importance of the site is also evident from the presence of an approximately 90 m long ball court - one of the largest in Mesoamerica, of which only the approximately 1.50 m high side walls, which are precisely aligned with one of the temple pyramids, have been preserved. The pyramids consist of a heaped up core with an outer cladding made of precisely hewn and assembled stones that were broken in the vicinity and transported here. One must assume, however, that even the numerous niches were covered with a layer of stucco and colored paintings.

The preserved structures of the cult site all have decorative niches on the outside, as they are characteristic of the architecture of the Totonaks. The pyramidal bodies are graduated several times, but without showing the Talud-tablero scheme, which was typical for the cult site of Teotihuacan , which was dominant in the region at that time - whether the lack of this construction method is also to be understood politically remains unclear. The same applies to the question of whether the side surfaces of the stepped structure of the pyramid could be entered by flag-bearers or other people on ceremonial occasions.

The temples at the top of the pyramids, which are only recognizable in their plan, were accessible by the Priest-Kings via steadily ascending stairs delimited by side walls, all of which faced the large square.

Shortly after their arrival in the region (around 1522), the Spaniards built a small single-nave chapel on the slope of the hill at the foot of the former ceremonial center - an indication that one or more Indian settlements were still nearby at that time . The unadorned building made of rubble stone has neither a recognizable apse nor a bell gable - the bells were hung on a wooden stand construction on the side and still have to be rung by hand. In the small square in front of the chapel there is an approximately 20 m high trunk for the grandiose spectacle of the Voladores .