Tactical light as target lighting on a Beretta 92FS 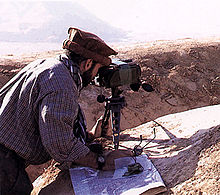 With handguns, it means the tactical light or the laser attachment mounted on the weapon . In some countries, such as B. Germany , these devices are prohibited for private individuals.

With target illumination, a distant observer marks a target to be attacked with the help of radar , laser , microwaves or other radiation sources , such as. B. visible light . The radiation reflected from the target is received by the seeker head of a guided missile and used for control. The observer is usually an advanced soldier , a weapon system ( air defense system , attack helicopter or aircraft ), or a drone . For example, many anti-aircraft missiles use semi-active homing , in which a tracking radar illuminates the target and the missile steers itself towards the target based on the reflected radar waves. The guided weapon can be shot by the observer himself or by a third party.

The reasons for target lighting are the lower production costs of the guided missiles, no active components in the seeker head, and the significantly lower exposure of the weapon (no active radiation). Disadvantages are the observer's obligation to stay in the combat area and its easy location.

Target illumination with light was a common method in the air defense of the Second World War : approaching aircraft were detected by anti-aircraft searchlights and illuminated so that they could be fought with weapons from the ground.