Ziggurat of the moon god Nanna 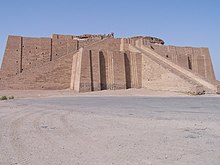 The ziggurat of the moon god Nanna ( Sumerian Etemennigur ) is an ancient oriental ziggurat with a base length of 62.5 × 43 meters and a height of 25 meters. The early antique step temple is located in the south of today's Iraq , approx. 15 km west of Nasiriya . It was built by the Sumerians in Ur under the rule of King Ur-Nammu and his son Šulgi over 4,000 years ago.

The ziggurat is a massive building made of adobe bricks with 2.5 m thick walls made of fired bricks. The corners of the building point in the four cardinal directions. In contrast to other ziggurats, the heights of the steps differ greatly: the lowest step was eleven meters high, those of the second and third steps are estimated at 5.7 and 2.9 m respectively. On the northeast side three flights of stairs led to a gatehouse between the second and third steps. The complex was crowned by the actual temple for the moon god Nanna.

In 1854 the British consul John George Taylor (often incorrectly identified as JE Taylor) examined the ruins. From 1922 to 1934, the British archaeologist Leonard Woolley carried out extensive excavations on Tell . He also tried to reconstruct the original appearance of the complex using old descriptions and representations, but this had to remain speculative from the second floor onwards.

In the 1980s, Saddam Hussein arranged for the facade and stairs to be restored.