Step temple is a collective term for buildings of earlier high cultures or Buddhist stupas, which are built in the form of superimposed, upwardly tapering high terraces or a stepped pyramid. The most important are found in the Middle East , South Asia and Central America . At the highest level is usually the sanctuary of a deity.

According to Genesis 11, the tower of Babel described in the Bible should reach to heaven. The report goes back to the step temple in Babylon , which rose as the main shrine of the god Marduk on a square base with about 90 m side length about 90 m high.

The Mesopotamian, step-shaped ziggurate represent temple towers, the emergence of which is interpreted as an architectural symbol for creation . Analogous to the Egyptian mythology of Heliopolis, they are supposed to symbolize the world mountain and the island that formed in the midst of the primeval chaos, and represent the connection between heaven and earth.

However, not all of these structures served religious purposes. A large number of step pyramids had the function of a tomb , for example the 62 meter high Djoser pyramid near Memphis in Egypt . The purpose of many other step structures from this 3rd dynasty (around 2,650 BC) is unclear, because none of them contain a burial chamber. In addition to religious motifs (symbol of the original hill of creation), it could be buildings for mock graves ( cenotaphs ), royal or political representational buildings. The step temple of Hatshepsut near Luxor, built into the rock, occupies a special position .

In Buddhist and Hindu culture, there is a wide variety of levels temples. Some temples were started as pyramidal step temples of a Hindu cult and later continued as a Buddhist stupa complex.

The two religions meet closely z. B. in the Kathmandu valley, where the oldest Buddhist temple in Nepal , the Swayambunath , is not far from Hindu shrines . 365 steps lead up to the temple complex with the 100 m wide stupa of the Buddhanath temple.

The Phousi opposite the royal palace of Luang Prabang in Laos is an example of a natural temple mount . The 130 m high mountain served as a spiritual center and was accessed by 328 high steps.
Numerous step temples can be found in Cambodia . In the jungle near Preah Khan , an ancient complex on a lake was cleared of mines in 2007 as an architectural feature. It is a more than 70 ° steep, almost 20 m high step building (made of limestone?) With 5 floors that get lower and lower upwards.

One of the largest Buddhist temples in Southeast Asia is Borobudur on the Indonesian main island of Java . The colossal pyramid, modeled on a hill, was built between 750 and 850 about 25 kilometers northwest of Yogyakarta and was recognized by UNESCO as a World Heritage Site in 1991. The stupa is considered the most important building of Mahayana Buddhism on Java.

9 floors tower on a square base of 123 × 123 m. The walls of the four stepped tapered galleries have bas-reliefs with a total length of more than five kilometers, which describe the life and work of Buddha . Above it are three concentrically tapering terraces with a total of 72 stupas, which frame the main stupa of almost 11 m in diameter.

In Tibet there are step temples at numerous monasteries - a particularly large one at Brahmaputra near Riwoche in western central Tibet. It was built by Mahasiddha Thangtong Gyalpo (allegedly lifetime 1385–1510), has 7 floors and a mandala- like floor plan, but was partially destroyed in the Chinese Cultural Revolution .

The Temple of Heaven in the south of Beijing , erected in 1420 and 1890, has a completely different shape . The huge round building has three stepped marble terraces in front, each about 4 m high and 140 m in diameter - in the north with a round floor plan, in the south square. On this hall of the harvest prayer rises a 36 m wide round temple 38 m high and with a triple curved roof. Seen from above, the base looks like an elongated dome and expresses the idea that the sky is round and the earth is angular. It was used for ceremonies of the emperor, who, as the son of heaven, prayed for a good harvest in spring . 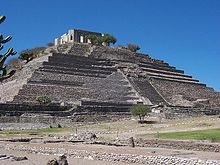 A particularly large number of step temples are preserved in pre-Columbian Central America , more precisely in the Mesoamerican cultural area. Some of them are not built from tapered terraces, but only from steps. Astronomical elements have often been incorporated into the architecture. This is the case with the pyramid of Kukulcán in Chichén Itzá . It has 365 steps, shows specific shadows on the equinox and is dedicated to Kukulcán .

The unconventional construction of the niche pyramid at El Tajín near Veracruz (Mexico) shows related symbolism . It is a skyscraper of 25 meters rising at 45 °, which has 365 niches in 6 floors (and a summit terrace) . As a 1225 m² ceremonial center it is supposed to symbolize the solar year . It is surrounded by smaller, stepped buildings arranged in a grid. The city's heyday is believed to have been around 700–900.

The most distinctive building of the ruins of Calixtlahuaca in the Toluca Valley is a steep, 4-story round building , to which a broad component with approx. 40 steps and a flat ramp leads from the east. Archaeologists associate it with the wind god Ehecatl .

At the temple pyramids of the Aztecs and related peoples, which are particularly common in Mexico , ceremonies typical of the region were maintained, ranging from ritual ball games to human sacrifices . The sanctuaries were dedicated to various deities and are still called Teocalli (house of the gods) today.

The largest of the step structures in Mexico is the Sun Pyramid of Teotihuacán with 225 × 225 m and a height of 63 meters. It consists of four 4-sided truncated pyramids, the slope of which becomes flatter towards the top. The lowest component is preceded by four approx. 5 m high steep steps. It is believed that the top level sanctuary was dedicated to a Magna Mater goddess. The name was coined by the Aztecs long after the complex was abandoned.

There are well-known temples from the Maya culture. a. in Yucatán in Belize , El Salvador , Honduras and Guatemala , for example those of Tikal or Uaxactún in Petén -region. Particularly impressive are the steep, 44-meter-high Temple I of the North Acropolis of Tikal with over 100 steps (picture) and Temple V made of around 100 five-meter-high stone blocks. The ruined city, overgrown by the jungle for 1100 years, was an important center of the Mayas from the 3rd to the 9th century; the first traces of settlement reach into the early 1st millennium BC. BC back.