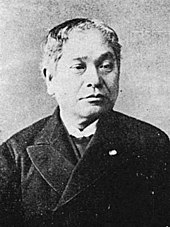 Ōki Takatō was a cousin of Ōkuma Shigenobu . He was born a samurai and participated in the Boshin war against the shogunate. After the Meiji Restoration in 1868 he became politically active, overseeing the relocation of the imperial capital from Kyoto to Tokyo, becoming governor of Tokyo, minister of interior, minister of religious affairs and education, until he became minister of justice in 1873. In this capacity he put down a series of 1876 anti-government uprisings, such as the "Hagi Rising" and the "Jimpuri Rising". He received this post again in 1880 and headed the committee that was supposed to formulate civil law.