The 6-pounder field cannon C / 61 was one of the first breech- loading guns with rifled barrel in the Prussian army . The C / 61 series included 6-, 12- and 24-pound cannons. The field artillery was assigned the 6-pounder as the first gun with a cast steel barrel, while the 12- and 24-pounder belonged to the siege and fortress artillery.

The 6 pounder had a caliber of 9.15 cm. The correct name for this gun was “drawn. Cast steel 6pfdr. with piston lock " . In 1871, as part of a reorganization, the type designation was changed to “9cm steel cannon with piston lock” .

It was the predecessor of the 6 pounder field cannon C / 64 .

Historically, the breech loading guns are the successors of the medieval chamber pieces (chamber loader cannons). There were repeated attempts to make breech loading cannons. However, these attempts essentially failed due to technical problems. Around 1840, the Swedish manufacturer Martin von Wahrendorff tried again to make breech-loading guns marketable. He started with smooth breech-loaders. He used a piston lock as a breech and full leaded bullets as projectiles.

In 1843 Prussia also began to experiment. These were carried out with smooth 6-, 12- and 24-pound cannons from Wahrendoff's construction. These cannons already had an improved breech block.

Based on the experiences that had been made in the meantime with rifled infantry weapons using long projectiles, Wahrendorff was encouraged by the Italian Cavalli in 1846 to equip his cannons with rifles as well. He also now used lead long bullets.

In the meantime, Prussia had also come to the conclusion that the increased performance of the infantry weapons would also require an increase in the performance of the guns. On the basis of this finding, Se. Royal The Highness Prince Adalbert of Prussia commissioned the Artillery Examination Commission (APK) on February 20, 1850 to give an expert opinion on this.

This date is to be regarded as the hour of birth of modern Prussian artillery. After much discussion, the APK then decided to use the Wahrendorff system as the basis for further development. The concrete experiments began in 1851. The tests were carried out initially with pipes made of cast iron and later of bronze. However, both materials proved unsuitable for use in rifled guns. Based on experiences that had already been made with Krupp cast steel tubes, two cast steel blocks were ordered in 1855 for the production of drawn 6 pounder breech-loading cannons. Krupp only supplied the blanks for this. The final processing took place in the artillery workshops in Spandau. In the subsequent shooting tests, this variant was found to be very suitable.

In May 1857, Major v. Wedell created a memorandum in which he tried to demonstrate the need to introduce a rifled six-pounder as an equivalent to the rifled infantry weapons. August Encke, the head of the APK at the time, was not entirely convinced of this idea. He wanted to replace the previous smooth six-pounder made of bronze with a new, short twelve-pounder, as he believed that this gun could better meet field requirements. This gun was actually introduced on March 10, 1859 and remained in existence until the end of 1866.

The experiments with the rifled six-pounder continued, however, and so it came about that during a test shooting on May 7, 1859, the then Prince Regent Wilhelm ordered the immediate procurement of 300 six-pounder guns. The pipe blanks were supplied by Krupp. The mechanical processing was carried out by the companies Wöhlert and Schwarzkopf in Berlin.

As early as January 1860, the rifled cast steel 6-pounder was introduced by means of the Highest Cabinet Order in such a way that every artillery regiment had to convert three 12-pound batteries into 6-pounders.

This conversion took place during the summer of 1860.

The then chairman of the artillery examination commission , August Encke, made a special contribution to the introduction of the Krupp cannon barrels . After him, in recognition of his achievements, the previous Magdeburg Foot Artillery Regiment No. 4 was renamed "Foot Artillery Regiment Encke (Magdeburgisches) No. 4".

The new guns were labeled “pulled. Cast steel 6pfdr. with piston lock ”introduced into the Prussian army. The addition "C / 61" as a classification feature was added at a later date.

From a technical point of view, the C / 61 series was a further development of the medieval chamber loader cannons. Similar to these, they were also loaded from behind. The original idea of ​​Wahrendorff was that he wanted to create a type of gun that would be easier to use in the cramped conditions of ships or casemates. Another reason after 1846 was that it was impossible to load the leaded long projectiles from the front. In other European countries, however, a different approach was taken by using drawn muzzle-loaders with a different bullet shape (see the La Hitte system ).

The tube was made of cast steel and, in its original construction, was cylindrical at the rear over approx. 3/4 of its length and then tapered conically towards the front. The end was formed by a frieze in the mouth, which was connected to the tubular body with a groove. At the point where the transverse hole for the closure was made in the pipe, reinforcements were attached to both sides of the pipe. Approximately in the middle of the tube were the so-called shield pins on both sides with which the tube was mounted in the carriage. At the transition between the trunnion and the tube there were additional reinforcements that had the task of fixing the tube in the mount. The ignition hole stood with its axis; Approximately 1/4 "in diameter approximately 1.6" from the front face of the locking piston. The pipe was equipped with 18 parallel pulls.

The so-called Wahrendorff piston closure was used as the closure . This consisted of the locking piston made of wrought iron, the transverse cylinder made of cast steel, the locking door made of bronze and the crank. The crank of the clamping screw of the locking piston was secured with two nuts in this first series use. In later versions, these nuts were replaced by an iron split pin. To obturator cup-shaped pressboard discs were used, which had been fixed to the 6-pounder with the cartridges.

The C 42/56 construction was used as the carriage . The designation C 56/61 can also be found in the literature. The mounts were made according to the Prussian wall mount system. With this system, the walls are parallel and evenly thick. In this system, they were kept at a distance by three bars (forehead, middle and tail bars). The upper edge of the carriage walls was broken twice and divided the carriage into breast, middle and tail pieces. The lower edge of the carriage walls was straight and only rounded like a slide at the tail end in order to allow easier gliding when returning. The walls were uniformly 2.65 inches (about 6.95 cm) thick with a height of 12.9 inches (about 33.75 cm) in the chest piece. The clearance between the carriage walls was 9.05 inches (approx. 23.7 cm). The walls had cutouts for the trunnion bearings and the axle chuck as well as wall openings for the pins of the bolts and the alignment shaft bearings. To stabilize the carriage walls were girded with three side bands. A shaft straightening machine was integrated into the mount. This consisted of a wrought iron straightening shaft, the straightening screw, the straightening base and the crank with the adjusting nut. The straightening shaft was pivoted in the walls. The wrought iron axle was attached to the walls by means of a wooden axle lining. In addition to the left wall of the mount, a so-called axle box made of sheet iron was attached to the axle lining, which was intended to accommodate smaller gun accessories. The wheels were ordinary wooden wheels and, including the tire, had a diameter of 58 inches (approx. 151 cm). The storage height, d. i.e. the distance between the installation surface and the center of the trunnions was 41.4 inches (approx. 109 cm) 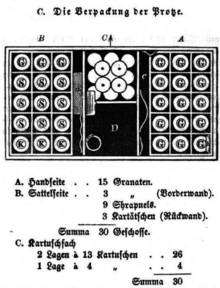 As Protze the material C42 / was also used 56th The designation C 56/61 is also found here in the literature. The limber consisted essentially of the limber frame, the wrought-iron axle in a wooden axle liner, the two wheels, the wheel diameter was 47.50 inches (approx. 124 cm) including the tire. The drawbar, the fixed rear bracket for the pole horses (the middle horses were tied to a movable front bracket) and the limber box as well as a number of necessary fittings. The swank box was set up to hold 30 storeys in wooden bullet boxes. The complete equipment, but without the required gun accessories, can be found in the inserted table.

This gun, which by and large had proven to be quite functional and suitable for war, remained in the field artillery until after 1870. Later it was used in the fortress artillery. A complete redesign of this type took place with the material C / 64 .

The 6-pounder was loaded as follows:

The gun is now ready to fire.

After the rifled guns were introduced, the ammunition had to be adapted accordingly for this type of gun. In analogy to the projectiles of the smooth guns, grenades, incendiary grenades, shrapnel and grapeshots were also provided for the rifled guns. The construction of the grenades did not cause much difficulty and was completed in the spring of 1859. At the time, the ignition device used was the C 61 percussion fuse, developed by Rudolf Sylvius von Neumann in 1859, because it was also known as the Neumann fuse: 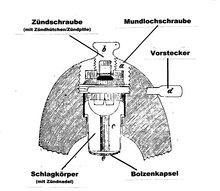 It consisted of the following parts.

It looked a little different for the construction of the shrapnel. Since the previous flame fuses (time fuses) were not suitable for breech-loaders with pressed projectile guidance, the percussion fuses of the grenades were also used for this. This was a concession to those in the artillery who believed that shrapnel was indispensable in artillery combat. It was similar with the grapes. In the end, these too were only introduced or retained with consideration for opinions within the artillery.

The grenade (called the lead shirt grenade) consists of: Iron core about 7.06 inches (18.50 cm) long and about 7.5 pounds in weight. The iron core was provided with 4 hoops and these were interrupted with 2 longitudinal cutouts. These had the task of fixing the lead jacket in its position. The thick lead jacket weighs approx. 5.5 pounds, the explosive charge approx. 15 solder (approx. 250 gr.) Gun powder and the ignition device C 61. The bolt caps, needle bolts and mouth screws were already pre-assembled from this. Total weight: 13 3/4 Prussian. Pound = 6.875 kg.

These are the normal grenades which were also filled with 6 fires. The incendiary grenades were only carried in the ammunition wagons. Detonator like the grenade.

Outwardly, the iron core had the same shape and dimensions as the grenade. However, it had thinner walls, so that it had a larger free space, weight about 6.25 pounds. The lead jacket was like the grenade, weight about 5.5 pounds. The filling consisted of 88-92 lead cavalry balls, which were fixed by a sulfur pouring. Weight of the stuffed shrapnel approximately 15.5 pounds. In addition, there was the explosive charge, approx. 12 solder (20 g) gun powder, which was filled into a tube to prevent it from mixing with the sulfur pouring. The loaded shrapnel weighed approximately 15.75 pounds. Ignition device: Since at the time of introduction there was still no fully functional time fuse, the existing Richter time fuse was not suitable for the field artillery, the shrapnel was also equipped with a C 61 percussion fuse. As this solution was unsatisfactory, the use of shrapnel in the field artillery was discontinued in 1866

The usual utility charge consisted of 0.6 kg of Prussian gun powder in a cartridge pouch. Cartridges with a weight of 0.5 or 0.3 pounds were still available for the so-called high bow shot.