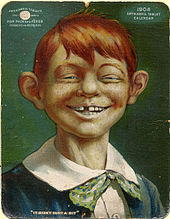 Alfred E. Neumann (in English Alfred E. Neuman ) is the mascot and eponymous hero of the satirical magazine MAD . The fictional character already existed before MAD claimed it for itself in 1954. Alfred E. Neumann is shown as a street boy with red hair, protruding ears, freckles and a broad grin that reveals his tooth gap (s). The figure is a symbol of limitless stupidity .

Alfred's face goes back to the end of the 19th century and appeared, among other things, as an advertisement for a dental treatment product (“Antikamnia”, see picture) and for political propaganda . The portrait was often associated with the slogan “What - me worry?” (In German: “Was - ich worIEL?”) And used accordingly years later.

After the American satirical magazine MAD featured Alfred's portrait on its front page years later, it was sued twice for copyright infringement. But MAD was able to prove that the face used was much older and already existed at the time the plaintiffs claimed it was invented.

Alfred's face first appeared in MAD magazine in November 1954 on the cover of the reprint The Mad Reader . In March 1955, Alfred was first seen on the front page of the magazine, but still very small and under the simple name Idiot Boy . From July 1955 he was to be seen on every issue, still in mini format and this time under the name Melvin Cowznofski . In May 1956 he was finally given his name, namely after the conductor Alfred Newman .

In October 1956, the draftsman Norman Mingo was commissioned to produce a portrait, which first appeared on the cover of the magazine in December 1956. Since then, Alfred has been featured on almost every front page of MAD magazine. The portrait was painted by Frank Kelly Freas .

The meaning of the E. in the name is unknown .

Alfred E. Neumann is now considered a symbol of undeniable stupidity and naivete. During his presidency , George W. Bush was often compared to him, mostly because of his "What, me worry?" Attitude. Many other personalities were said to have Neumann qualities, such as Prince Charles , Rick Astley , Ted Koppel , Oliver North and David Letterman . In an interview in May 2019, US President Donald Trump said: "Alfred E. Neuman cannot become president of the United States" (German: "Alfred E. Neumann cannot become President of the United States"), an attempt to defeat presidential candidate Pete Defame Buttigieg as naive and stupid.