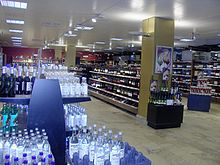 From 1919 to 1932 there was a total alcohol ban ( kieltolaki ) in Finland , which was however undermined by private distilling of schnapps. The first Alko branch (at that time: Oy alcoholiliike Ab ) was then opened in Helsinki on April 5, 1932 at 10 a.m. due to a referendum in December 1931 . Back then, customers still had to ask for products and know what they wanted to buy, as the bottles were not presented with the customer label on the shelves behind the seller.

In 1995, when Finland joined the European Union , Finland undertook to dissolve monopoly positions in production and import. The company was then divided into three areas: Alko (sales), Primalco (production) and Havistra (bulk purchasing), which all belong to the Altia Group. In 1998, Alko was completely separated from Altia and has existed as an independent legal entity ever since, although Alko remains Altia's main customer.

Since January 1, 2004, Finns have been allowed to import 110 liters of beer, 90 liters of wine , 10 liters of spirits and 20 liters of other alcoholic beverages from other EU countries without tax. Previously, only one liter of spirits and five liters of wine were allowed. Since the import of alcohol from Sweden and Norway is hardly worthwhile because of the high prices there, most alcohol is imported from Tallinn ( Estonia ), as the Estonian and Finnish languages ​​are relatively similar and there are different ferries that run the Helsinki – Tallinn route Cope with 90 minutes.

In 2017, Alko operated 353 stores and 61 order points. You can often find an order point in small supermarkets or shops in the country, where you can order products from the alcohol range and pick them up the next day.

Due to a ban on advertising for high-proof beverages, Alko also draws attention to the negative effects of alcohol in its advertising.

In many Nordic countries there are comparable alcohol monopolies, for example the Systembolaget in Sweden , the Vinmonopolet in Norway , the Vínbúð in Iceland and the Rúsdrekkasøla Landsins in the Faroe Islands . In Denmark , on the other hand, alcohol is freely available, even if it is still much more expensive than in Germany and Austria.