Molotov cocktail , also incendiary bottle or gasoline bomb , often abbreviated as Molli , is a collective name for a large number of simple incendiary charges , such as those used in riots , riots , street battles , in guerrilla wars or to carry out arson attacks .

A Molotov cocktail goes down near police officers during a demonstration in Rostock against the G8 summit in Heiligendamm (2007).

The simplicity of the weapon suggests that it was used in conflict very early on. The Greek fire , fire pots and incendiary balls are earlier forms of a thrown fire set. Due to the increasing processing of petroleum into petrochemical products such as petroleum or gasoline and its spread in the second half of the 19th century, flammable liquids were easily available to practically everyone, so that this type of weapon could also be used in irregular conflicts.

For the first time with clear evidence, the weapon was used in the Russian Civil War (1918–1922), and later in the Spanish Civil War (1936–1939), but not yet under the name “Molotov Cocktail”. The same applies to the Nomonhan incident in 1939, in which Japanese soldiers , because they were not adequately equipped with anti-tank weapons, used gasoline-filled bottles against Soviet tanks.

The name itself was coined in 1939/40 by Finnish soldiers and civilians in reference to Vyacheslav Molotov , the then Soviet head of government and People's Commissar for Foreign Affairs of Stalin , who was held responsible for the Soviet invasion of Finland or its trivialization and the subsequent " winter war " . When attempting the annexation, Molotov had claimed that Russian bombers would bring bread for the civilian population - a lie that caused outrage in Finland. The Finns then called the bombs Molotov's bread baskets and invented a “drink to go with the meal”. 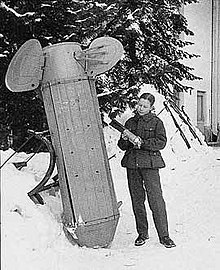 "Molotov bread basket", an early cluster bomb Soviet production, offset by inclined vanes in rotation when launched, 60 small incendiary bombs (in the hands of the woman) distributed over the target area (the Winter War of 1939-40)

The Finns successfully used Molotov cocktails against Soviet tanks . Thrown on the turret or engine of the tanks of that time, they often set them on fire. Finland started to have the cocktails produced industrially by the state-owned company Oy alcoholiliike Ab (today Alko ) and to send them to the front in packets with the required matches . A total of 450,000 pieces were produced.

The German Wehrmacht took over this idea and had Molotov cocktails produced under the name “Brand Bottle” or issued various instructions for independent production. Often a filling made of gasoline and flame oil was used, and storm matches attached to the neck of the bottle were usually used as detonators .

Around the same time, in 1940, a launcher called the Northover Projector was developed for the English Home Guard , which could fire flasks with phosphorus ignition around 180 m. However, this weapon was not entirely safe for the shooter, as the glass bottles could break during or shortly after leaving the barrel.

In the Second World War, the Red Army and the Wehrmacht also used Molotov cocktails. They were also used en masse in the 1943 uprising in the Warsaw Ghetto , in 1944 in the Warsaw uprising and in 1956 during the Soviet invasion of Hungary, which ended the Hungarian uprising .

In addition to ignition by simple pyrotechnic means, hand grenades or chemical detonators attached to the vessel were also used, especially in military production and use. For example, a special form of the Molotov cocktail in World War II were bottles in which gasoline and sulfuric acid were filled. They were then sealed and wrapped in paper which was soaked in potassium chlorate solution and dried. When the bottle was smashed, sulfuric acid and potassium chlorate came into contact, reacted exothermically and ignited the gasoline.

While the use against tanks has not been common practice since the World War II, other incendiary devices, such as flame throwers , napalm and phosphorus , partly as outlawed ordnance, are still in the military inventory.

Molotov cocktails can still be found today as mostly improvised weapons in conflicts of all kinds.

In Germany, the Molotov cocktail is listed as a prohibited weapon in the weapons list ( Section 2 (3) WaffG in conjunction with Annex 2, Section 1, No. 1.3.4 ). Thus, according to § 52 Abs. 1 Nr. 1 WaffG the acquisition, possession, letting, carrying, transferring, taking with you, manufacturing, repairing as well as trading with it are prohibited. It is also not permitted to instruct or request the production of Molotov cocktails ( Section 52 (1) No. 4 in conjunction with Section 40 (1) WaffG). Violations of the ban are punishable by imprisonment from six months to five years. Throwing Molotov cocktails at people, for example at police officers in street battles , is often assessed as an attempted homicidal offense ( murder or manslaughter ) because the thrower at least approves of the potentially fatal consequences of a hit .

Legal situation in the USA

In the United States , Molotov cocktails are federally classified as destructive devices ("The term" destructive device "means (1) any explosive, incendiary, or poison gas"), so production (for private individuals) and transfer must be subject to a tax of $ 200 be registered with the responsible authority ATF . Production or possession without this registration can be punished with a prison sentence of up to 10 years.

Infantry weapons of the Red Army in World War II