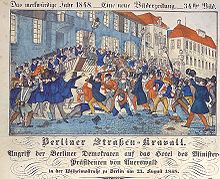 Riots in front of the headquarters of MP Rudolf von Auerswald (August 1848), contemporary. Illustration from the Neuruppiner picture sheet, 1848.

Ruckus (including riots ) is a term for one against the public order -related disorder by riot or noise .

The Duden describes riot as tumult with violence as well as riot and colloquially for "extremely lively or excited noise and bustle" by a large crowd. The term riot has a similar meaning .

A person who is actively involved in or initiates a riot is called a riot maker. The terms rioters and “troublemakers” have a similar meaning.

The origin of the word is unclear. Is suspected descent from older, vernacular crawallen (16th century), which in turn from the Middle Latin chravallium descended, with the caterwauling were designated, street noise and strife. Tumult denotes' noisy mess of excited people, tumult 'and was borrowed at the end of the 15th century from the Latin tumultus ' restlessness, din, (war) noise, rebellion, excitement' (from Latin tumēre 'to be swollen, flare up with anger, to be sultry '), in the political sphere it is used to denote an uprising , uprising , uprising accompanied by violence .

Pierer's Universal-Lexikon assumes a connection between riot and Charivari in 1857 , dates the word occurrence - as Chawall - to the 14th century and states that in the vernacular there is “1) noise, spectacle; then 2) a large-scale political demonstration (mostly only of the lowest social classes) associated with noise, demolitions, etc. ”.

According to Meyer's Grosses Konversations-Lexikon of 1907, riot means “a word that has only emerged in modern times, something like turmoil , tumult; is from the Mittellat. charavallium (French charivari) derived. Rioter, participant or initiator, leader of a riot, then a term for a contentious, noisy person in general. "

Since the 19th century, riots have been a form of protest, especially among the urban lower classes, who are directed against social injustices. In some cases they were also explicitly linked to calls for a change of policy and government. The name was coined during the political unrest of the July Revolution of 1830 in Hanau , when the bourgeoisie there rose against the neo-absolutist form of government and the unsuccessful customs and economic policy of Elector Wilhelm II of Hesse and the next wave of the revolution began in November after the proletarian lower class revolted over rising food prices and was opposed by the civil guards . After that, small, one-piece buns were known colloquially as rioters in Hanau for a long time .

The drainage of a swamp area outside the city gates was initiated as a public employment project for the Hanau rioters . The drainage ditch required for this was (initially not officially) called the Krawallgraben , which is still reflected today in the street name Am Krawallgraben .

Riots also occurred during the revolution of 1848; but they were also and especially in non-revolutionary times an outlet for public protest. One example is the riots on the Blumenstrasse in Berlin in 1872 against the eviction of tenants. The organized labor movement, which was growing stronger at the time, especially the trade unions and social democracy, condemned riots as apolitical and “undisciplined”; she preferred strikes and demonstrations. Nevertheless, their base continued to participate in urban riots such as the Moab Riots in 1910.

On July 22, 1907, the day the verdict in the Carl Hau murder case was pronounced , a street riot ( Hau riot ) broke out in Karlsruhe out of curiosity and the public's thirst for sensation , in which even military units, due to excessive demands on the police forces to restore order namely two companies of the 1st Baden Leib Grenadier Regiment No. 109 , had to be opposed and which went down in history as "Street Fight in Peace" ( Ferdinand von Notz ). Such a crowd of curious people - observers spoke of 20,000 people - had never before occurred in any criminal trial in the German Reich .

During the First World War, hunger and food shortages caused an accumulation of riots in the major cities of Germany and Austria-Hungary from 1916. Women who were responsible for feeding their families took part in these food riots.

Although the riot was often seen as a premodern and unorganized form of protest that was made superfluous by parties and unions, riots, social unrest and riots are still a constant in social protest culture today. Of the Halbstark riots of the 1950s through the 1962 Schwabing riots and the riots on May 1, 1987 in Berlin-Kreuzberg to the US race riots in California in 1992 or the London Riot of 2011, numerous examples can be mentioned. A riot, so a conclusion of protest researchers, always occurs when there is no other, representative outlet for social demands or seems to be.

See also : breach of the peace  and street battle