Irisarri is a redirect to this article. The French place Irissarry is also called in Basque. 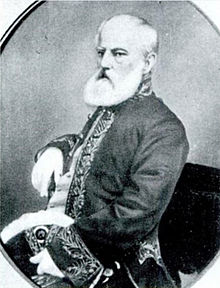 Antonio José de Irisarri (born February 7, 1786 in Guatemala City , † June 10, 1868 in Brooklyn ) was temporarily the first Director Supremo of Chile in 1814; this was the forerunner of the presidential office.

After studying in Guatemala and Europe, Antonio José de Irisarri traveled to Chile in 1809. The enthusiasm of the independence struggle in Chile infected him too. In 1810 he rose to the command of the National Guard and head of the civil and military government in the Santiago region.

From March 7, 1814 to March 14, 1814 he was the first interim director of Supremo Chile. In 1819 he became Minister of the Interior and Foreign Affairs of Chile, but went to Argentina as Minister that same year . At the end of 1819 he was sent to London, where he took out a loan of $ 5 million. This was followed by many ministerial offices in various South American countries.

At the end of his ministerial tenure in 1849, he went to Curaçao and a year later to the USA . In 1855 he represented El Salvador and Guatemala as a diplomat in the USA. He died in Brooklyn (New York) in 1868.