Workers' choirs belong to the cultural milieu of the growing social democracy of the 19th century. As a rule, they were formed by socialist-minded members leaving the existing bourgeois choral societies when they boycotted and vilified social democratic aspirations. The "Singers Association", founded in Frankfurt am Main in 1863 at the suggestion of Ferdinand Lassalle , is considered the oldest . In the 1870s, even before the Socialist Law, the workers 'singers' movement flourished: in 1873 the Arbeiter-Sängerbund Hamburg was founded, in 1874 the "Lassallia" in Frankfurt, and in 1876 the Berliner Arbeiter-Sängerbund. In the times of the socialist law, the club life was a platform for the continuation of the activities of the banned party. But in 1913 only about half of the workers' singers were members of the SPD or the trade unions. The choral societies served as mediators between the party and the (still) unorganized workforce. In these years the number of 200,000 members of the workers' choral societies exceeded that of the bourgeois " German Singers Association ".

Singing festival of the workers' choirs in Apolda in 1913 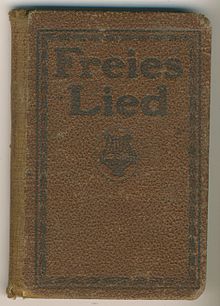 One example is the Society of Friends of Singers, founded in Weimar in 1885, which has achieved a high level of quality since 1907 under the Weimar theater choir singer Emil Steiniger . Since 1908 this workers' choir with its 80 singers has been on a par with the civil choral societies. His repertoire consisted of progressive and folk songs, opera choirs and choral compositions by great masters. In 1914, a women's and girls' choir was added under the direction of Arthur Herder. As a soldier, Steiniger was a victim of the First World War .

The workers' choral societies played an important role in raising awareness among women, who were forbidden to participate in politics during the first years of their founding. In 1910, however, there were already 91 all-women and 128 mixed choirs in Germany, in which (1914) 18% of all active members were women.

In Germany, workers' choirs were united in the DAS, the German Workers' Singing Association, which, like all other organizations of the workers' movement, was smashed in 1933 after state power was transferred to German fascism .