The resolution in the physical context is the limit of the ability of a device or a test arrangement to be able to separate values ​​for a physical quantity from one another. The resolution therefore indicates the smallest perceptible difference. These can be voltages, angles, distances, frequencies or any other physical quantities.

The basic standard for measurement technology defines resolution as an indication of how far a measurement device can clearly differentiate between measured values ​​that are close together; quantitatively, it can be specified by the smallest difference between two measured values ​​that a measuring device clearly differentiates. The measurement deviation that occurs jointly with both values is irrelevant.

Small changes in measured values can be resolved better by means of a difference-forming measuring method , for example Wheatstone bridge , than when observing the measured variable itself. 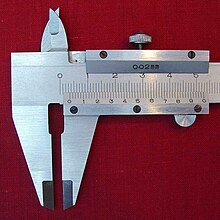 The resolution can be specified in two ways:

Resolution for the measured value display

In principle , a measured variable can be represented as finely as desired on a scale , but reading the measured value on the scale is only possible with limited resolution. The reading is limited to 1 ⁄ 2  …  1 ⁄ 10 scale division , depending on the design of the scale . With a scale divided into millimeters, about ½… ⅕ mm can be resolved without further aids. In the picture shown , lengths of 0.01 mm (½ scale division on the slide) can still be differentiated using the vernier scale. Ultimately, a measured value read on a scale can only be estimated in terms of its fineness; it is subject to an estimation uncertainty .