ANZAC is a redirect to this article. Further meanings are listed under ANZAC (disambiguation) .

The Australian and New Zealand Army Corps (ANZAC) was an army corps of the armed forces of the British Empire in the First World War . It was formed from Australians and New Zealanders . The ANZAC fought at the Battle of Gallipoli , in the Middle East as well as in France and Belgium .

In Australia, New Zealand and Tonga , ANZAC Day is celebrated to commemorate those who fell in the corps. This holiday is celebrated every year on April 25th, the day when the ANZAC landed on the Gallipoli peninsula in 1915 during the Allied Dardanelles operation . 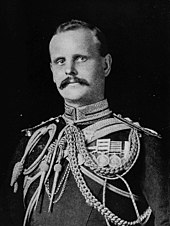 During this time "ANZAC" became a common short form. This was used to describe all associations that were composed of Australian and New Zealand units. The I. ANZAC Corps, under the leadership of General Birdwood, was posted to France in March 1916; the II. ANZAC Corps, commanded by General Godley, followed a short time later.

The ANZAC Mounted Division under Harry Chauvel was also formed in 1916. Their area of ​​operation was the Middle East, especially Egypt, the Sinai Peninsula and Palestine .

On the Western Front, the ANZACs were involved in many battles. Australian and New Zealand units were included in the Somme battle as part of some British units . During the Battle of Pozières the ANZAC appeared for the first time (I. ANZAC consisting of the 1st, 2nd and 4th Australian divisions). In the further course of the war, the Australian Corps was formed under General Birdwood (later John Monash ) with all five Australian divisions at the end of 1917 . The New Zealand Division served under various British corps.

In connection and as a reminder, various things were named after ANZAC:

Major formations of the Australian and New Zealand Army 1914–1945