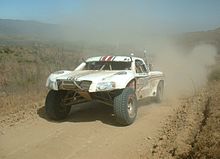 The Baja 1000 called and the rally raid similar race on the Mexican peninsula of Baja California ( Baja California ) is one of the longest and toughest car and motorcycle race in the world.

A motorcyclist on the Baja 1000

From the hippie culture of the 1960s, the buggies were created on VW Beetle platforms in the west of the USA : vehicles with the roof cut off or, for the most part, with a light plastic body without a roof or doors. To a certain extent, more powerful engines were soon installed, both tuned engines from the VW Beetle and modified engines from other makes. It didn't take long before these buggies were used for spontaneous races on stretches of beach . This leisure activity drew ever larger circles until an event emerged from it in 1967, which undertook to contest the entire length of the Lower Californian peninsula with a car, but also motorcycle race.

The starting point is Ensenada , the destination is Cabo San Lucas . A total distance of at least 1000 miles, but sometimes 1300 miles, has to be covered. There are typically ten checkpoints along the way; Breaks are charged to the total time.

In the meantime, buggies and beetles are no longer considered competitive in any way; The Baja 1000 race has been subject to strict regulations and a professional event over the past 30 years that has nothing in common with the early hippie years. The vehicles that have been used for many years are usually special constructions, similar to those used in autocross (in terms of appearance) or in the Dakar Rally (in terms of technology). However, participation in the Baja 1000 is still more of a private matter, as large automobile companies hardly participate, in contrast to the Dakar Rally . The Baja 1000 race , like the “Dakar”, enjoys the reputation of the toughest off-road race in the world.

The Southern California Off Road Experience ( SCORE ) has hosted the Baja 1000 since 1975 . The Baja 1000 is part of the SCORE International Off-Road Racing Series . Based on the Baja 1000 , the Baja Deutschland , Europe's largest off-road rally raid, has established itself in Germany .

In 2005 the film Dust to Glory was released . It documents different epochs of the Baja 1000 (mainly the 2003 event), illuminates the background, interesting facts such as the different racing classes (trophy trucks, buggies etc.) as well as the stars of the scene.