In the classical sense, Balint groups are working groups of around eight to twelve doctors who meet regularly under the guidance of an experienced psychotherapist to talk about "problem patients" from their practice. The goal is an improved doctor-patient relationship , which should ultimately lead to an improved understanding and treatment of the patient . 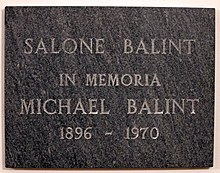 The method was named after Michael Balint (1896–1970), a psychiatrist and psychoanalyst of Hungarian origin. After the Second World War, Balint initially held case conferences with social workers at London's Tavistock Clinic . In them the participants could learn to better perceive the unconscious processes in the work with their clients on the background of psychoanalytic theories. From 1950 he conducted similar case conferences with general practitioners in private practice and referred to them as discussion seminars on psychological problems in medical practice . In 1954 he reported in the British Medical Journal about his new method of continuing medical education. In 1957 his classic "The doctor, his patient and the illness" was published. From 1972 "International Balint Meetings" took place on Monte Verità near Ascona.

The most important methodological element of the Balint group work is the free report on a case study. Usually one group member describes an encounter with a patient. The group then examines the doctor-patient relationship that can be identified from this in a free, collegial conversation, in free association and imagination. "Our main goal was to investigate the constantly changing doctor-patient relationship as thoroughly as possible, that is, to study the pharmacology of the drug 'doctor'," explained Balint. So he compared the effectiveness of the doctor with a drug that can have desirable and undesirable effects.

The concept is based on the psychodynamic understanding of illness in psychoanalysis . Thereafter, attention is particularly directed to the phenomena of transference , countertransference , regression , acting , shifting , splitting off , counter-phobic defense or reaction formation . Central questions are: What does the doctor do with the patient? What does the patient do with the doctor? What feelings does it trigger in him (and in the other group participants)?

Regrede
Regrediting is an attempt to overcome a situation that is difficult to bear by causing other people to overly care for the person who is being regressed through passive or early childhood behavior.
Act
When acting, a situation that is difficult to bear leads to behavior that attracts so much attention in the environment that underneath it the real problems are lost from view.
Counter-phobic action
In counter-phobic action, fear is masked by overactivity - often also by objectively useless actions.
Escape to the front
When fleeing forwards, attempts are made to make fear bearable by directly bringing about the fearful situation.
Move
When moving, a problem that is difficult to bear is pushed forward with another - less burdensome one - and by preoccupying with it the problem that is more difficult to bear is pushed into the background.
Split off
When splitting off, in emotionally difficult to cope with situations, opposing feelings can be put to the side of each other on an equal footing, whereby at one point in time only one state of feeling is accessible to the consciousness, at another point in time.
Reaction formation
During the formation of a reaction, a state of feeling that is difficult to accept in oneself is transformed into its opposite in behavior.

From this relationship diagnosis , conclusions are drawn about unconscious conflicts that the patient and doctor “bring with them”. In particular, raising awareness of countertransference feelings (e.g. aversion, anger, disinterest, increased interest, pity, helplessness, etc.) provides valuable diagnostic information that can be helpful in further contact with the patient.

Today, Balint groups are generally recognized as an element in the training and further education of doctors and psychotherapists and also as a method of supervision in other areas of health, social and educational services. In a modified form, they are used by executives by experienced leaders in this area. At some universities, Balint groups are also offered for students, but often in the form of thematically related anamnesis groups . In Germany, doctors who want to acquire the additional title of “psychotherapist” and statutory health insurance physicians who take part in basic psychosomatic care are required to provide evidence of Balint group experience.