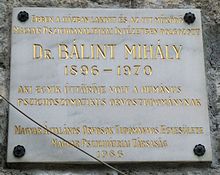 Bálint was born in Budapest in 1896 as the son of a general practitioner. His parents were Hungarian Jews . He later converted to Unitarianism and Magyarized his name from Bergsmann to Bálint . From 1914 to 1920 Bálint studied medicine in Budapest. During this time he was also a soldier in the First World War. In 1920 he received his doctorate in Budapest, married in 1921 Alice Székely-Kovács , a subsidiary of aspiring psychoanalyst Vilma Kovács , and went with her to Berlin, where both at Hanns Sachs , a training analysis received and began a psychoanalytic training at Psycholanalytischen Institute. In 1924 he returned to Budapest, where he continued his psychoanalytic training with Sándor Ferenczi . He later also acted as editor of his writings. From 1926 he was admitted to the Psychoanalytic Institute in Budapest as a training analyst. In 1929 he published a paper on psychoanalysis and clinical medicine, which made him one of the pioneers of psychosomatic medicine . In 1935 he succeeded Ferenczi as director of the Budapest Psychoanalytic Institute.

The anti-Semitism in the Horthy regime caused him to emigrate with his wife and child to England in 1939, he first went to Manchester and later to London. In 1947 he started working at the London Tavistock Clinic , where he began his research at the Family Discussion Bureau with his second wife, Enid Bálint . In the 1950s in Great Britain he developed a reflection group for doctors ("Bálint Group"), in which the relationship between doctors and their patients was psychoanalytically thematized in the form of supervision . In 1968 he was elected President of the British Psychoanalytic Society .

He dealt intensively with the influence of unconscious fantasies of the doctor towards the patient. He showed that psychological complexes can be transferred from the doctor to the patient without reflection and thus have a significant influence on both the attitude towards the patient and therapeutic decisions. In 1950 the first seminar for general practitioners took place, a case discussion group that dealt with the psychological dynamics that arise in general practice . As so-called Bálint groups , these seminars have meanwhile found worldwide distribution. In Germany, nursing scientist Hilde Schädle-Deininger is one of the advocates of Bálint groups in psychiatric care.

In Anxiety and Regression (Original: Thrills and Regressions . London 1959) Bálint presented the dynamics of the conflict of autonomy and dependency in depth. By introducing the pair of terms oknophilia and philobatism , he enriched the understanding of the basic psychological conflict of inner soul dynamics.