Example of a bimodal image histogram 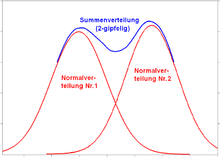 Bimodal distributions occur in many human-viewed situations. Often the fact that the examined group is subject to two different groups is responsible for the two modes. Would z. If, for example, the proportion of erythrocytes in the blood of a group of people is shown in a frequency distribution, this would result in two modes, since men usually have a higher proportion of erythrocytes in the blood than women.

A bimodal distribution is important because the underlying data can be easily divided into two classes. This is usually done by choosing a threshold value at the point where the minimum lies between the two maxima. Such a method is used, for example, in the binarization of images, a type of segmentation in which only two segments are generated, e.g. B. by applying a threshold method .

The specification of confidence intervals for random variables with a multimodal distribution is more difficult than usual . It must also be specified (e.g. symmetrically) in order to describe it clearly.