This article describes the measure of samples. For the mode of a probability distribution see mode (stochastics) , further meanings can be found under mode .

The mode , also called the modal value , is a position parameter in descriptive statistics . It is defined as the most common value that occurs in the sample. If, for example, exam grades are recorded for a school class, the mode corresponds to the grade or grades that were awarded most frequently.

In contrast to other position measures, the mode has the advantage that it always exists. However, it is generally ambiguous.

Each characteristic expression that occurs most frequently in a sample is called a mode of the sample. A mode is therefore exactly one peak of the corresponding frequency distribution . The mode is a number that most of the data will match.

The most common notations for the mode are or .

The sample is given

The characteristic values and appear. Occurs once, as well as . Both and occur twice. Furthermore, there is no trait that occurs three times or more. So result as modes

During a class test, the grades were

forgive. The grades and were each awarded once, the grade twice and the grade three times. No further grade was given four times, so the mode is

Looking at the sample

So all values ​​except for each occur only once, but three times. So is the mode 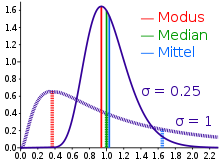 The mode is always defined, but in general not unambiguous either. The example under the nominal scale shows both : none of the common measures of location can be used in such a general framework, but two modes occur in this sample. The extreme case occurs when all characteristic values ​​in the sample are different from one another: Then each occurs only once and thus each is also a mode.

For samples with an order structure, the median can be defined in addition to the mode . The two do not have to match, in the example below the ordinal scale would be the median

whereas the mode as

has been determined. For the median results

and for the arithmetic mean

Characterization of the slope

In observation series with ordinal and metrically scaled features, the mode value can be referred to as the density mean. In comparison with the median and arithmetic mean, the mode can characterize the inclination of the distribution - similar to statistical skewness . For example, Karl Pearson's mode skewness is defined as

The following rule of thumb relates the mode, median and arithmetic mean: