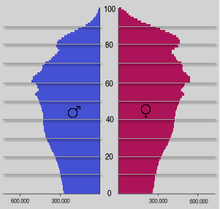 Example of an (absolute) frequency distribution: projected age distribution for Germany in 2050

In mathematical statistics, a frequency distribution is first of all a function that indicates how often this value has occurred for each value that has occurred and for each possible value. In terms of the concept of function, each element of the definition set, which here includes the set of possible manifestations of a feature, is assigned an element from the value set, which here consists of the counted relative or absolute frequencies.

At the same time, the use of this function and, in particular, its graphic representation is a highly suitable method for the statistical description of data ( measured values , feature values ) and their clear representation. Like any function, such a distribution can be described as a table , a graph or a model using a function equation.

The amount of data (measured values, survey data) forms the initially unordered original list . First, it is sorted or sorted. The median value , range (statistical spread ), quantile and interquartile range can be taken from the ordered original list ( ranking list ) and the standard deviation can be estimated.

The further calculation requires a division of the characteristic values ​​into classes . To do this, the value range that occurs is divided into, for example, 10 or 20 mostly equally wide classes (the rare values ​​at the edges (see " Outliers ") are sometimes grouped together in larger classes). One then arrives at the density functions , which in the case of a continuous distribution are the derivation of the empirical distribution function according to the characteristic value. Furthermore, the frequency can be determined not only by counting, but also, for example, by weighing. We then get a mass distribution instead of a number distribution . In principle, any additive quantity is suitable for measuring the frequency.

If a random sample deviates significantly from the expected distribution, this can be caused by the random sample, but also by undetected influences, selection effects or a trend . If the sample size consists of a superposition of several subsets (age distribution, occupations, groups), the frequency distribution can also have two or more peaks instead of a maximum .