The Jacana or Jacanas (Jacanidae) are a family of waterfowl in the order of Regenpfeiferartigen (Charadriiformes). Their habitat are water surfaces overgrown by aquatic plants, on which they find support with their oversized feet and look for food, build nests and raise their young. Jacana are one of the few birds in which the males take on the tasks of hatching and rearing young. The name Jacana, also sometimes used in German, comes from a Brazilian Indian language.

The size of the jacana varies between 15 cm (blueprint) and 30 cm (several species); the pheasant leaf chick differs from the other species in that its tail feathers are greatly elongated, which means that its total length can be up to 58 cm. The weight is 40 to 260 g. Females are always larger and heavier than males. On average, a female jacana is 78% heavier than a male, and the pheasant jacana 100%. In no other bird species are the females so significantly larger than in the jacaros.

The most noticeable feature of the jacanas are the extremely elongated toes, which are also unparalleled in the bird kingdom. With them, the weight of the jacana is distributed over a large area, making it possible to walk on floating water plants. One foot can span an area of ​​15 × 20 cm. The legs are also relatively long.

Black, red-brown and olive dominate the plumage colors. Some species have a white underside. There is no colored gender dimorphism . There is only one species, the pheasant leaf chick, that has different gorgeous and simple clothes. This only develops its overly long tail feathers in its splendid dress. Most species are characterized by bare skin on the forehead and throat, which are bright blue or red in color. There may be a mood-dependent color change in these parts: In the combs the color changes from yellow to red when excited.

Jacobins tend to be poor fliers, covering short distances. Three species have sharp spores on their wings as extensions of the metacarpus , which can be used in turf warfare. Jacana can swim and dive, but rarely use these skills. Only juveniles dive regularly to hide from predators, then only their beaks can be seen above the surface of the water.

A blue-fronted jacana in its typical habitat

The habitat is tropical and subtropical standing water that is overgrown by aquatic plants. Suitable plants include water lilies , hayweeds , floating ferns , spawning herbs and knotweed . 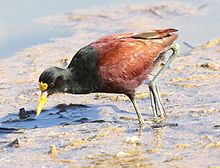 Red-fronted jacana in the Dählhölzli zoo in Bern

Jacana are primarily carnivores. Their main food is insects that live on the aquatic plants or in the water, or that have fallen into the water. In the search for food, parts of the plant lying below the surface are pulled out and the crustaceans, snails and insects living on them are stripped off. The floating leaves of the plants are turned with the feet in order to reach the animals living on the underside.

Small fish are very rarely eaten, and only when they are on the surface. In South America, jacobes have been seen pecking ticks from capybaras , and in Africa there is a similar behavior, in which the birds stand on the backs of hippos and rid them of parasites.

Plant foods are found in small amounts in the jacarid's stomach. It is unclear whether this is accidentally swallowed while insect hunting or deliberately eaten.

Seven of the eight species have a polyandric reproductive system in which dominant females mate with several males. The breeding and rearing of the young is then the sole responsibility of the males, while the females continue to watch over the territorial boundaries. The only exception here is the bluebird, which lives in seasonal monogamy and in which both partners are equally involved in the brood. The peculiarities outlined below therefore apply to all jacanas with the exception of the bluebird.

Both the males and the females defend territories , but within different limits: a male defends the area around his nest, a female but all of his males and their territories. The territorial boundaries change here: The first breeding males maintain quite large territories. Often times, they are the females' only partners at this point. As soon as the eggs are laid and brood begins, the males can only defend a smaller area. In the outer areas of the former area, more males are now building nests and setting up their own small areas. The female not only defends its large territory to the outside, but also helps its males to defend their territory, also against their own partners. However, this is the only job of the female, after egg-laying it has no contact with eggs or young birds.

There are also territorial fights among the females. If a female is driven from her territory, this has serious consequences for all males breeding there. The new female tries to conquer the entire territory for herself, but occasionally females from neighboring territories also manage to win over individual males, so that the old territory is redistributed. In any case, the broods of the expelled female are destroyed: This applies to eggs as well as to young birds that are pecked to death by the newly arrived female. Only older young birds can flee in such a case. The males breed with the new female soon after losing their brood. Most females have three or four partners, but there can be fewer or more. In very small ponds there is often only space for one male territory, so that monogamous pairs can be formed here.

The nest is a floating platform made of water plants. The substructure often consists of twigs, the upper layer consists of leaves and other green parts of the plant. The male is solely responsible for the construction. It often builds several such swimming nests. The pair copulates on one of these platforms, later the female chooses a nest to lay her eggs. During the entire brood the nest is repeatedly repaired and expanded by the male. If a nest proves to be unstable, the male can move with his brood to another nest. To do this, the eggs are rolled onto an adjacent platform or, if this is not possible, clamped between the beak and chin and transported over.

A clutch always consists of four eggs. Theoretically it is also conceivable that a male gets the eggs of a competitor laid in his nest. It is unclear whether and how it is guaranteed that every male gets the eggs that belong to him. The eggs have a shiny, moist-looking surface and are monochrome in pheasant leaf chickens and black in all other species. The brood lasts 22 to 28 days; during this time the male repeatedly leaves the nest to look for food and leaves the clutch unguarded.

The young hatch at the same time. The eggshells are then moved at least 10 m away from the nest - this behavior, which some seagulls also know, is intended to prevent predators from drawing attention to the nest. The boys are independent after ten to twelve, sometimes even after six weeks. In some species, the males carry their young around between their wings. The boys' feet protrude from the plumage.

The breeding success of the jacobes is low: Less than half of the clutches remain intact until the young hatch. This is due to territorial fights, the weather conditions (heavy rains wash eggs into the water), enemies or unintentional destruction by ungulates crossing a pond and destroying the nest in the process.

Because of their external resemblance to the railings , jacaras were sometimes assigned to the crane birds in the past . Despite the name, there is no relationship to the chicken .

Today the jacobes belong to the plover-like species . Within this group, a close relationship with the golden snipe (Rostratulidae) was assumed early on , due to similarities in the skeletal structure and the common number of ten hand wings (all other plover species have eleven hand wings). In DNA analyzes, a sister group relationship between jacobes and goldcock was confirmed; the taxon formed from these two , sometimes called Jacanoidea, is in turn a sister group of the high altitude runners , and these three together are a sister taxon of the snipe birds .

Jacana have been known to be fossilized since the Oligocene . The first recent genus appears fossil in the Pliocene .

The eight species are divided into six genera as follows:

Jacana are divided into two monophyletic taxa: One is formed by the American species of the genus Jacana and the pheasant jacana, the other by the other species. A cladogram looks like this:

The jacana was never of any particular importance to humans. Due to the poor accessibility of their habitats, they never played a role as meat and egg suppliers or as pests or beneficial insects.

Because jacaras depend on thickly overgrown swamps and lakes, they are very sensitive to changes in the landscape. The habitat of the jacana is dwindling as swamps are drained. In other cases, humans have also created new habitats for the jacana , for example at the Kariba reservoir . However, artificial lakes are only suitable as long as the vegetation is not removed for aesthetic reasons.

Indirectly, humans also harm the jacana through the introduction of animals and plants into new habitats. The water hyacinths from South America spread in some African lakes ; these grow too dense and high for them to be able to form suitable vegetation. In Australia it is the large number of introduced ungulates that devour entire lakes of aquatic plants.

Even so, none of the eight species are endangered on a global scale.