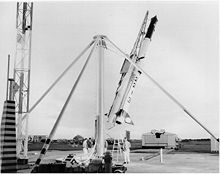 A RAM-B missile on launch

The Blue Scout Junior rocket was a three- or four-stage American sounding rocket of the US Air Force , the development of which was derived from the military Blue Scout version of the Scout rocket. The rocket was based on the Castor rocket engine.

A modified three-stage version was used three times by NASA under the designation RAM-B .

The rocket could reach heights of up to 200,000 m in suborbital flights, making the Blue Scout Junior the high-altitude research rocket with the highest peak height to date. Takeoffs took place from both Cape Canaveral and Vandenberg Air Force Base . NASA civil flights were conducted from the Wallops Flight Facility .

In addition to technological experiments, the Blue Scout Junior SLV-1C also served as an emergency communication system (ERCS, Emergency Rocket Communication System) for the US armed forces. This system was operational from 1963 to 1967 on three bases in Nebraska until it was replaced by modified Minuteman II missiles.