Exit from the Brudertunnel heading south 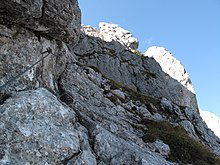 In the lower part of the via ferrata

The Brudertunnel , also called Lamstunnel , is a natural tunnel in the Karwendel .

The Lamstunnel / Brudertunnel is part of a via ferrata that is named after the tunnel. The via ferrata leads east of the Lamsenjochhütte through one of the north faces of the eastern Hinterautal-Vomper chain between Lamsturm and Steinkarlspitze ( 2460  m above sea level ). The brother tunnel itself is at the top exit of the short climb. In the last part it is slightly overhanging. The climb itself is rated C , but is i. A. felt easier. It is mainly used as an approach to the surrounding peaks such as B. Lamsenspitze , Steinkarlspitze and Hochnissl .

The Brudertunnel takes its name from the brothers Franz-Karl and Toni Unterlechner, who expanded the natural opening after the Second World War and made it accessible in the first place. Franz-Karl Unterlechner ran a rope factory in Schwaz in Tyrol and manufactured ropes for agriculture and alpinism after the war. Toni Unterlechner opened the toboggan hut at Pillberg-Grafenast, today's Bio-Aktiv-Hotel Grafenast, which is still family-owned.