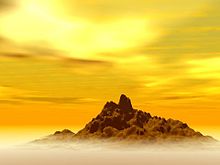 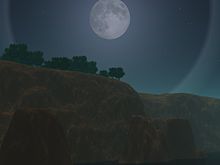 Simple Boolean objects made in Bryce 5

Bryce is a 3D landscape generator whose name was inspired by Bryce Canyon in Utah . The idea for this was developed by Kai Krause who, together with his company MetaCreations, developed and sold the program up to and including version 4. After MetaCreations shifted its product orientation from graphics software to 3D web applications in 2000 and went bankrupt a little later when the dot-com bubble burst , all MetaCreations products, including Bryce, were sold to other companies. Corel acquired Bryce and developed it further into version 5. Fan fears that Corel could redesign Bryce to the point that it could no longer have anything to do with the original version of the program have not come true. Finally, Bryce was sold one more time, only to be upgraded to version 5.5 by DAZ Productions and later (October 2006) to version 6.0. Even today, the program looks and feels almost like it did in version 2.0, for which Kai Krause created a completely new interface.

From version 5.5 the program supports the import of Daz-Studio figures and now offers an OpenGL preview with textures. Version 6.0 was released in autumn 2006. It supports hyperthreading for dual CPU use and can process HDRIs as background images . In addition, some workflow simplifications have been introduced. Version 6.1 of Bryce was released on March 7, 2007. The advantages of this program are, above all, the intuitive user interface and a large number of presets that enable the creation of a landscape in the shortest possible time. This is particularly advantageous for beginners in 3D computer graphics . The program is particularly intuitive for artists, even if advanced users can discover many other functions, some of which are very hidden.

For advanced graphic designers, it is certainly disadvantageous that Bryce only offers one view of the scene at a time and there is a lack of more complex modeling tools. However, you can quickly switch between different views. The various export and import options for other 3D file formats make up for this disadvantage. Finally, the specialization of the program is clearly on the design and manipulation of landscapes.

Bryce version 5 was available for free download for Windows and Mac from late August through September 6, 2006. In June 2007 a similar campaign was started with version 5.5, nothing is known about a time limit.