The Roman Catholic castle chapel St. Laurentius is located in the municipality of Wolfsegg in the Upper Palatinate district of Regensburg in Bavaria (Kapellenweg 3).

The former castle chapel of St. Laurentius dates from the 14th century. It appears in the archives in 1508 as the Lady Chapel, and also in 1665. This dedication is very unusual for a castle chapel . In 1723 it traded for the first time as Laurentiuskapelle. Alterations were made in the first half of the 18th century.

The chapel was the only church in Wolfsegg until the Wolfsegg parish church was built in 1935/36 . 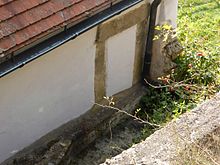 The former castle chapel stands on natural rock on the southern slope of the castle rock outside the castle walls of Wolfsegg Castle . The church is a single hall building with gabled roof , a verschindelten roof turret with Baroque onion dome and a three-sided final. It could be entered from the castle to the mansion gallery via a small gate in the fortress wall. The gallery door is still covered horizontally today. The two south-facing arched windows were broken out later. On the west side there is a walled-up arrow-slit-like pointed arch window. The church is accessed from the south side.

The altar with four winding columns dates from around 1700. In the church there are wooden figures of St. Sebastian and St. Laurentius. The bell dates from 1798.