from Wikipedia, the free encyclopedia
This is the spotted version , flagged on January 12, 2020 . There is 1 pending change that has yet to be viewed. 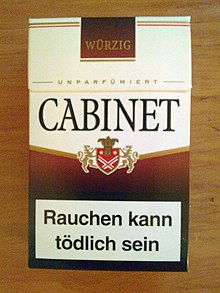 CABINET is a German brand of cigarettes from the group Imperial Tobacco belonging Reemtsma GmbH and is mainly engaged in the new federal states to obtain.

Cabinet cigarettes were introduced in the GDR in 1972 and produced by the state-owned company VEB Tabak Nordhausen as well as by the United Zigarettenfabriken Dresden . Before the change, the monthly production was around 800 million cigarettes and the market share in 1989 was 33 percent. After reunification , Reemtsma initially took over production, and the market share fell to ten percent. Production took place in Nordhausen until the end of the 1990s , then the location was closed and production continued at the main plant in Langenhagen . New variants were then introduced and the taste changed.