Cobb-Douglas function of form . You can see the amount produced depending on the capital and labor input

The Cobb-Douglas function is based on knowledge that Johann Heinrich von Thünen gained in agriculture in the first half of the 19th century. With its per capita capital gains function

He developed the first indirectly formulated Cobb-Douglas production function with as a level parameter, and as yield or capital input per worker and as the substitution elasticity of capital.

Two early works are often cited in the history of the Cobb-Douglas function: Coordination of the Laws of Distribution (1894) by Philip Wicksteed and Lectures (1901) by Knut Wicksell (or Ekonomisk Tidskrift , 1900). Despite these publications, it can be shown that Wicksell implicitly used its functional relationship as early as 1895 and explicitly used it from 1900.

The Swedish economist Knut Wicksell (1851–1926) succeeded in formulating the relationships between production factors and total production with an existing elasticity of substitution as a production function in the form known today.

The American economist Paul Howard Douglas began in 1927 with a first formulation of the Cobb-Douglas production function. Using the example of the manufacturing industry in the USA between 1899 and 1922, Douglas empirically dealt with the question of the relationship between production there and the capital stock and the number of workers employed . In search of a functional description of this relationship - a so-called production function - he discussed with a colleague, the mathematician Charles Wiggins Cobb , who had previously used the function Wicksell and Wicksteed had already used

In 1928 they estimated using the method of least squares for - the so-called production elasticity of labor - a value of ; the result was later replicated by the National Bureau of Economic Research with a value of approximately.

A Cobb-Douglas function is generally a function given by:

with ; and for everyone .

Another restriction is that the exponents just add up to one, that is, therefore

Amount produced depending on the capital and labor input

authoritative. At any point in time ( ), total production is produced in the economy using the production factors labor ( ) and capital ( ) with the help of a given technology level ( ). Then referred to here

The same applies to the production elasticity of labor

that it corresponds to the exponent ( ), which in turn represents the wage income share. These results are mainly used in growth theory .

Demand functions that are obtained from a Cobb-Douglas utility function have the property that households always spend a constant proportion of their income on goods . This application is an example of why the property mentioned in the previous section often makes it easier to use the function; the exponent can then be interpreted directly as the constant component sought.

Returns to scale and elasticity of scale

The scale elasticity - that is the approximate change in production in percent as a result of a one percent increase in all factors of production - the sum of the exponents .

In general, it also applies that the Cobb-Douglas function is homogeneous in degree in the defined sense . Furthermore, it is quasi-concave for everyone ; concave if and even strictly concave if .

The Cobb-Douglas production function still has the property of strict essentiality d. This means that the output rate is 0 if nothing is used by a production factor. This property implies that the function always passes through the origin. Formally,

For example, an economy whose production can be modeled with a Cobb-Douglas production function with the production factors labor and capital cannot generate any total production if one of the factors is not used.

If the economy moves along a “contour line”, the use of one production factor is substituted for that of the other . The law of the decreasing marginal rate of technical substitution applies .

The following three-dimensional representation shows a Cobb-Douglas production function of the form . The contour lines, which are in the form of indifference curves , can be represented by a horizontal section through the mountain of benefits and a subsequent projection onto the plane. 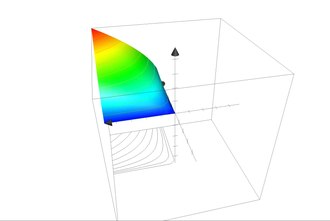 Play media file
"Projection" of the contour lines into the plane (animation).

Scope of the production function

The Cobb-Douglas production function is particularly useful for modeling larger economic systems (from larger companies to entire economies). Empirical studies of the German chemical industry between 1960 and 1975 gave, for example, the following estimate:

The regression coefficient has been replaced by a parameter that increases over time and shows technical progress.

The first step is to calculate the per capita version of the function for better handling:

In order to obtain a linear model, the function is linearized by logarithmizing:

So we finally get the econometric model:

The unknown parameters of this model can be estimated using single linear regression . The logarithmization shows that the error term follows a logarithmic normal distribution ( ). In general, an econometric model with the production factors I and the total production factor Y can be represented as follows: