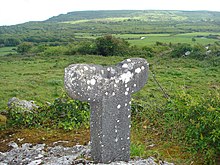 Tau Cross, replica south of the R476 road from Killinaboy to Kilfenora

Corofin (also Corrofin; Irish : Cora Finne ) is a small town in the northeastern part of County Clare in the Republic of Ireland with 776 inhabitants (2016), which corresponds to a doubling of the population since 2002. It is on the R476 between Inchquin Lough and Lough Atedaun, at the southern end of the Burren and at the intersection of Ennis , Gort , Ballyvaughan and Milltown Malbay .

Nearby are lakes rich in fish, the Tau Cross on Roughan Hill , a Holy well and old castles (such as Dysert O'Dea ) and palaces. A well-preserved Sheela-na-Gig can be seen in the nearby Killinaboy . There is a hostel and the Clare Heritage Center in town.

The Tomb portal of Moyree-Commons is east of Ballyteige Lough (lake) at Corofin.