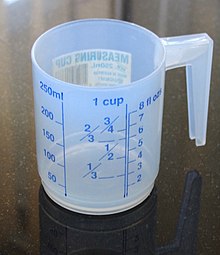 A plastic measuring cup with a cup.

The (or the) cup (literally " cup ") is an Anglo-American unit of measurement used in the kitchen for volume, i.e. a measure of space . The unit symbol is cup, or, if it is not clear from the context which definition is meant, Imp.cup or US.cup.

The American Cup (US Cup) is still widely used in American cooking recipes . The British Cup (Imperial Cup) is rarely used in Great Britain itself, but only in a few former colonies. If a metric measuring cup is used , 235  ml is an approximation for the US Cup and 285  ml for the Imperial Cup.

The cup literally means cup , but it is different from the z. B. in German recipes usual approximate unit of measurement cup is a defined unit. Although there are several different definitions of the cup, each of these definitions describes an exact set. A local coffee cup is usually noticeably smaller than a cup. B. must be taken into account when translating recipes.

However, there are differences in the subunits:

The following applies to both systems of units: 1 pint = 2 cup = 3 tea cup

When the metric system of measurement was introduced, many traditional units of measurement were adapted to metric measurements. The same goes for the cup. 1 liter corresponds to 4 or (in Japan) 5 cups.

The traditional Masu measuring cup for sake has a content of