Visible detonation wave (marked in the picture) during an explosion

A detonation wave is a shock wave that spreads in all directions due to an explosion if the original expansion speed is greater than the speed of sound in the surrounding medium.

The prerequisite for rapid expansion is an increased sound speed of the exploding material, typically in connection with high temperatures . A steam boiler explosion leads to a detonation wave, while the bursting of a compressed air tank only leads to a bang.

'Quiet' sound waves obey the linear wave equation . Such sound waves can penetrate each other without interaction. The criteria for 'quiet' (regardless of the eardrum) are that both the sound pressure and the dynamic pressure due to the speed of sound are small compared to the static pressure . Immediately understandable reasons: The total pressure must not become negative and with the pressure rises and falls also the temperature and thus the speed of sound. Illustrative consequence: a short wave train riding a long wave crest runs faster than this until it reaches the front flank. An even shorter one is superimposed on the two, etc., so that the steepness of all the front flanks is added.

The Friedlander waveform as a prototype of a detonation wave.
It shows the difference between the pressure and the static pressure, which is 100 kPa (1 bar).

In 1946 Friedlander proposed the waveform shown opposite. For pressures that are not too high, it fits well to experimentally determined pressure curves. The following formula specifies this waveform as a pressure curve over time at a fixed point in space:

Description: Starting from the undisturbed, static pressure , the pressure jumps up instantaneously and then swings up with an undershoot (down ) . 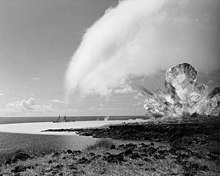 Wilson cloud in the negative pressure range of the detonation wave of 500 tons of TNT on the Hawaiian island of Kahoʻolawe .

In the area , the temperature can drop below the dew point and a Wilson cloud can form if the air humidity is sufficient and the distance from a possibly nuclear fireball is large enough.

For higher pressures, the temperature rises so high that the air is dissociated into atoms and ionized. Firstly, this changes the equation of state ; secondly, there is a lot of thermal radiation , which also contributes to the conduction of heat via the steep impact front to dissipate the energy in the wave. In nuclear explosions, the thermal radiation is in the UV and X-ray range, i.e. it is absorbed by air, which complicates the calculation of the detonation wave.

With the propagation, however, the energy is distributed over an ever larger surface of the shock front until the wave changes into a normal sound wave, which only propagates at the speed of sound.

Fig. 2: Non-linear reflection of the pressure wave of an atomic air explosion

Distance-dependent decrease in the overpressure (red) and dynamic pressure (yellow) of a nuclear explosion. In the steeper area the gas is highly ionized. The transition of the shock wave to a normal sound wave is outside the diagram.

The former US Defense Nuclear Agency (DNA) developed a model for the computational estimation of explosion pressure waves around 1984, which provides the dependence of the overpressure peak as a function of the distance as well as the detonation height and the explosive energy. Although the model was originally developed for nuclear explosions , it can also be applied to almost any other explosion types using scaling rules, provided the explosion originates from a point source and inhomogeneities in the surrounding medium or the reflective surface are negligible. The model, which is available in the form of a DOS BLAST program , is not subject to confidentiality. It is based essentially on the Rankine-Hugoniot equation and empirical Ausgleichungsrechnungen on the basis of Nuclear test data on.