The Big Tower , (Romanian: Turnul gros ) in Hermannstadt (Sibiu) , is part of the old fortress of the city and was built in the 16th century. It and its annexes have served as a theater since 1788, with a few interruptions.

The tower was built as part of the bastion in the southeast of the city wall. The location is now between Harteneckgasse (Romanian: Strada Cetăţii) and the Promenade (Romanian: Bulevardul Coposu ), with access from both streets. 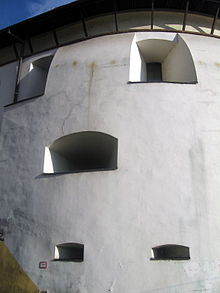 The construct is built on a U-shaped floor plan. It is a semicircular massive brick building with a substructure made of stone masonry with several levels of defense and a platform on which cannons could be set up. The belly of the tower lies around 25 m in front of the defensive wall like a bastion. The concept was that of a roundabout that should be defended with firearms.

In the 16th century

Thick tower as part of the fortress in Sibiu

The tower was part of the fifth defensive wall of the medieval castle, which was built between 1540 and 1552 under the direction of the mayor Petrus Haller. So it was once used as an infantry tower and was an important part of the bastion. The building was donated by the royal judge Markus Pempflinger in 1540.

In the 18th century

In the 18th century, there was a desire in the city for its own city theater. This idea was largely inspired and financially supported by Count Bánfy, a Freemason , but the first project failed. It was not until Martin Hochmeister the Younger (1767-1837) succeeded in doing this by converting the Dicken Turm into a self-financed theater that opened on June 1, 1788. Since then, the "Theater im Dicken Turm" has been used. The first plan came from Vienna plans, but Hochmeister also had to take the conditions on site into account. So he had the wall of the third defensive ring in front of it demolished, thus opening the street more to traffic and paving the street from the theater to the Great Square (today: Piaţa Mare), and also founded a covered corridor that connected the courtyard with the theater entrance . In 1788 the construction of the balconies was completed, built on two floors, a total of 23 or 20 de boxes - opposite the stage that of the governor - were set up. A box could be rented for two to three ducats a month. In 1791 he created a passage between the promenades, which was named "Theatertreppe", but which was closed again in 1818. Christoph Ludwig Seipp was the first director of this establishment (1789–1791). This was made possible by Count Bánfy, who had persuaded his lodge brother to leave his place of work in Pressburg . In addition to dramas, operas and operettas were performed in the theater.

In the 19th century

On August 6, 1826, a Slovak director staged fireworks on the stage, which led to the complete burning of the theater and thus to its ruin. The son of the founder, Martin Hochmeister Junior, spent 17,000 guilders on the complete restoration, which was carried out on the model of the Leopoldstädter Theater in Vienna , so that on March 1, 1827 a new play could be performed. In 1849 the performances were stopped because General Józef Bem had confiscated the theater during the Hungarian revolt , but a year later the activity was resumed and in 1865 the magistrate bought the theater from the successors of Hochmeister for 35,000 guilders. From then on, the game was played here continuously.

In the summer of 1868, Mihai Pascalys troupe made a guest appearance in the city on the occasion of an "artistic and national propaganda trip through Transylvania". Their prompter was Mihai Eminescu . It was the first time that the Romanian language was played on this stage. The troupe did not pay rent for the hall on the condition that they could offer some performances free of charge to the poor in the city. The contemporary press noted that all the performances were sold out and that some of the performances were even attended by city officials. Many spectators came in national costumes from the Romanian villages in the area.

From 1876 the theater building received a new facade, which gave it a monumental note. The interior has also been renovated and decorated in white, red and gold colors. The reopening then took place on September 1, 1887 with Goethe's Faust .

Entrance to the Thalia Hall at the Dicken Turm

In the 20th century until today

The name " Thalia ", which is known today among the people of Sibiu, comes from the communist era, when after a fire on February 13, 1949 and the subsequent restoration, the union club of the "Independenţa" factory had its home here. The structure was also damaged during the Romanian Revolution in 1989 .

After 1990 the district council decided to restore the building complex. The work, which began in 1994, was completed ten years later. The tower was renovated in 2006 and integrated into the new theater. Nowadays, the city's Philharmonic performs concerts in this building using the Thalia Hall (with up to 500 seats).