This article deals with the concert overture by Felix Mendelssohn Bartholdy; further meanings can be found under Hebrides (disambiguation) . 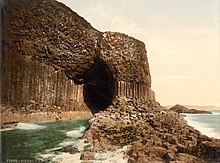 The Fingals Cave on the island of Staffa

The Hebrides or The Fingals Cave (Fingal's Cave) op. 26 ( MWV P 7 ) is a concert overture by Felix Mendelssohn Bartholdy . The name refers to the Hebrides , a group of islands 50 kilometers off the northwest coast of Scotland.

Mendelssohn began this work in 1829. He received the inspiration for it on a trip to England and Scotland , when he visited the Fingals Cave on the Scottish island of Staffa on August 7, 1829 with his friend, poet Karl Klingemann , and while doing so also made a pencil drawing of the landscape. The composition is available in three versions. The first version, entitled The Lonely Island , was completed in Paris in December 1830, but was not performed because it reminded the composer of “ counterpoint ” rather than “ Tran und Möwen ”. He revised the work in Rome in February 1832. This version was first performed on May 14, 1832 under the direction of Thomas Attwood in London. Shortly afterwards, Mendelssohn revised the work one more time. The first performance of the final version took place on January 10, 1833 under the direction of the composer in Berlin .

The work became a success, especially with the British , and even Richard Wagner , who was inclined to anti-Semitic tendencies, praised the composer, who came from the Jewish Mendelssohn family, as a “first-class landscape painter”.

The work is mainly in B minor and ends with a minor circuit in that key, not with a Verdurung to B major . The main theme , representing the swell, is performed by viola , cello and bassoon and varied in the course of the overture. It is supported by the drum reminiscent of the rumble of thunder .

The playing time of the overture is approx. 10 minutes.