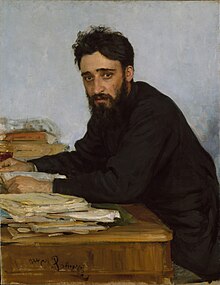 The red flower ( Russian Красный цветок , Krasny zwetok ) is a short story by the Russian writer Vsevolod Garschin , which was published in 1883 in the October issue of the Otetschestwennye Sapiski in Saint Petersburg .

The month of May in one of the 1880s in a Ukrainian madhouse : the anonymous patient is magically attracted by the two bright red flowers of three poppy bushes in the asylum garden . When he tries to tear off one of the two flower stalks, a guard prevents it. Later - in the evening - at an unguarded moment, the patient tears off one of the red flowers and hides them under his shirt directly on his chest.

How was that with the opium ? It comes from the poppy seeds. So the poppy has absorbed all evil; contains all the shed blood of the innocent. According to the patient's will, the evil in this world should now diffuse through his chest into his interior. In there it can and must be defeated.

The sick cannot help it. Before the strict guard mentioned above can intervene, he also tears off the second flower, hides it again on his chest and hides in the house.

When the patient is convinced that all evil has penetrated from the poppy flowers, the flowers wither. He burns the remains of poppies in the bath stove.

After that, with so much evil intus, the sick person is very bad and has to go into a straitjacket . When he sees a third poppy seed bud bursting outside in the bed, the rapidly emaciated man frees himself from his straitjacket without outside help, cunningly overcomes the barred window to the garden, tears off the third red flower and crushes it in his hand. In his view, the patient has internalized all the evil in this world and collapses under the immense burden that has been incorporated. In the morning he is found dead with a happy smile on his face. The dead man does not give up the third flower. He will be buried with her.