The Dima Halam Daoga (DHD) was a separatist organization in India , which wanted to establish a separate state "Dimaraji", named after an ancient kingdom, for the members of the Dimasa people who settled in the mountainous regions of Assam . 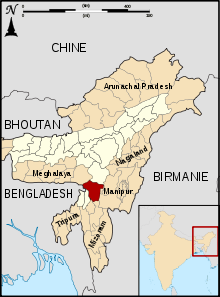 Location of the Cachar Hills, area of ​​main activity

The DHD is a successor organization to the Dimasa National Security Force (DNSF), which surrendered in 1995. It was also founded in 1996 by Mihir Barman (aka Jewel Garlossa ). Initially, we cooperated with the NSCN (IM) . In addition to the armed struggle for nationalist goals, campaigns against alcohol consumption and the use of poison for fishing in the rivers were launched. In the North Cachar Hills (NCH) district, there have been repeated clashes with fighters from the Hmar People's Convention (Democracy) who have similar goals for their people who live in the same region. The DHD leader Naklai Dimasa was shot dead by Black Widow fighters on October 28, 2008 .

Most of the funding came from extortion (mainly from tea plantations) and ransom money. Attacks on security forces from ambush were particularly frequent. Otherwise the activities were mainly evidence of criminal energy. Part of the group declared a unilateral ceasefire on December 23, 2003. This parliamentary group (DHD (N)) is led by Pranab Nunisa ("president") and Dilip Nunisa ("chairman"), who overthrew Garlossa on June 24, 2004. About 500 cadres gathered in camps where they received Rs. 2000 monthly support and training. They finally began to surrender their weapons on August 10, 2009.

The violent element of the organization split off at the end of 2003 as Black Widow (BW; also called DHD (J)), which was active in the districts of Karbi Anglong , Nagaon and especially North Cachar Hills until the summer of 2009 and as its boss Jewel Garlossa until acted for his arrest in June 2009.