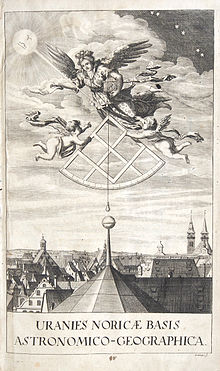 In astrology one understands under direction (Latin directio: "align", "direction"; dirigere: "lead", "lead") the technique of determining time. It is one of the most important forecasting techniques for horoscope analysis . "The only task of the direction calculation is to determine the time of the events displayed in the basic horoscope." By means of the imaginary shifting of one aspect point (promissor) to another (signifier), an alignment occurs that is interpreted according to the astrological content. The apparent shifting (conducting) is calculated according to a specific time key corresponding to the time of the event and plotted in degrees as a directional arc on the ecliptic or the celestial equator .

The prediction of events using so-called directional techniques is a very complex area, and its historical development has not yet been sufficiently explored. In ancient times, primary directorates had been known since at least the 2nd century. One of the earliest sources can be found in Claudius Ptolemy's Tetrabiblos.

Directorates in general in their history and development

Astrologie Wilhelm Knappich explains the primary directions with analogies: “But besides the world soul there is also an earth soul that resembles a flame and that, like animals and plants, has its special instinct, an“ instinctus geometricus ”that perceives the constellations and angular positions in a circle can. The earth soul also has a memory for the individual configurations and the course of the sun in the zodiac, yes, it is itself a "potential zodiac". And everything that has been said about the earth soul applies equally to the human soul ”. The possibility of the natal chart and the primary directions is based on this vital faculty and the soul's memory for all star positions, "since the birth constellations in the vital faculty of the soul continue to shine throughout life."

Significator (= signifier) ​​is a stationary place in the horoscope, to which one is directed (led). Promissor (= slip of the tongue) is the place imagined in motion that is directed to the stationary signifier. According to more recent tradition, signifiers can be any top of a house and any planet. Promissors can be all house cusps, planets, their aspect locations and the lunar nodes. Half-distance points and antiscias can also be effective as promissors.

In the older astrology of the 15th to 19th centuries, the ascendant , the center of the sky , the sun, the moon or the so-called lucky point are usually considered promissors who are led (directed) to the signifier (meaning). The development over the centuries refined the calculation of the director's sheet. “The arc that is passed through until a direction is entered and is measured on the celestial equator as the difference in right ascension must be converted into time using a proportionality factor , the direction key, i.e. That is, it is calculated when an event caused by the coincidence of the two horoscope factors will occur. The directional key used by Ptolemy was "classic" , according to which 1 ° = 1 year of life was set, but other conversion factors were also used in the 16th century, such as the mean daily solar movement proposed by Valentin Naboth. For him, 59'8 '' correspond to one year of life. These arithmetic operations were associated with considerable effort, but could easily be carried out with a celestial globe if one was prepared to accept inaccurate results. "

Some essential insights for the development and refinement of the directorates took place especially during the period between the 15th and 17th centuries, when Regiomontanus first tried to implement Ptolemy's instructions in 1467 by dividing the heavenly spaces by means of position circles. Jean-Baptiste Morin , who took up this doctrine, explains in the 16th book of his “Astrologia Gallica”, “that the directional movement is also not a physical-real, but a geometrically conceived movement, which is created by means of the projection of the guided heavenly points onto the primum Mobile is carried out, which is why the proper motion of the stars is completely disregarded here. Therefore Morin also rejects the secondary directorates taught by Kepler and the Italian school. "

In the 17th century, the mathematician Andreas Goldmayer also made an outstanding contribution to improving horoscope technique and direction, “whereby he himself demonstrated many calculation errors to important astrologers such as Johannes Kepler , Junctinus or Gerolamo Cardano . In 2 (German written) writings, the "Directorum mathematicum" (1657) and the "Computus directionum Astronomicus" (1658) he reformed the entire regiomontanic system of management and created new "invented and calculated tables", based on the "Satzcircul", i.e. . H. by means of a new type of position circles (W. Koch presented his management system in detail in "Zenit" 1930). "

The basis of all types of directorates is that aspects of a “small period of time” have an effect on another “larger period of time” in the future, which is exactly to be calculated by the method. This analogy is already mentioned in the Tanakh in Ez 4,5  EU : "But I want to impose the years of your guilt on you, one day for each year, namely three hundred and ninety days."

A distinction is made between primary directions, which relate to the primary movement, i.e. the rotation of the earth around itself, and secondary directions, which relate to the secondary movement, which is the movement of the planets over the course of the year according to the geocentric view of the world . Both start from the analogy between day and year , in that night has an equivalent to winter, and noon has an equivalent to summer. As the sun moves approximately one degree further on the ecliptic on a day from a geocentric point of view, the displacement of one degree in the primary direction corresponds to one year for the event time. In the secondary Directorate each planet, however, is directed by its own daily rate for the equivalent of a year, the moon so for. B. by 12-14 °, Pluto only by a few arc minutes .

Primary directions have undergone various refinements in the course of history, ranging from a simple degree direction on the ecliptic in antiquity to the equatorial direction under the inclined rise (AO) below the polar height of the signifier (see below) in the 20th century.

Different keys for the arcs in the primary direction calculation

As mentioned above, the correspondence of 1 ° to a year, called the "degree direction", can be refined by replacing it with the central solar arc, the so-called Naibod key. Another common type is the individual solar arc key, which is calculated from the solar arc of the day of the radix in question. Direction according to this key is called "solar arc direction". There are also individual keys that are determined based on past events. Here are some common keys:

The various keys mentioned, according to which the promissor is led to the signifier - the Naibod key is most widely used - are used either on the ecliptic or on the celestial equator . The latter are called "Equatorial Directorates", the former "Zodiacal Directorates". In occidental scientific astrology (astrologia sana), which had an origin in Ptolemaeus and further representatives in Campanus, Regiomontanus, Placidus, Maginus, Kepler, Morin, only the equatorial directions come into question.

Primary divisions according to different divisions of the sky

Most common since the beginning of the 20th century are the regiomontanic and the Placidian conceptions of a place in the horoscope as signifiers, which each result in different primary direction calculations.

1. The system that calculates with proportional parts of the half (day or night) arcs and that would correspond to the Placidus division between houses. One could call this system the “Ptolemaic” or perhaps more appropriately the “Placidian method”. This system can be considered the most widely used.

2. The system that calculates the primary directorates under the poles of the director partner preceding in the ascent, whereby this partner can be a signifier and a promissor, is called the “Regiomontanic”.

3. The system that allows the primary directions to apply only to the poles of the signifiers, whereby the term “signifier” is always to be understood as the fixed mundane radix location of a planet, denotes the system according to which Morin de Villefrache worked and which Kühr later developed.

Placidian directions under the pole of the signifier (Kühr method)

In the first half of the 20th century, the astrologer Erich Carl Kühr developed a direction system based on the Placidus house system, which calculated the direction in both directions according to the Naibod key on the equator after the inclined ascent, namely under the own pole of the signifier. This system finds practical application in the astrological prognosis and metagnosis of events that can no longer be calculated with the simpler methods. Kühr sees arcs of direction as angles "which form the projection points of the radical locations of the signifier and promissor on the equatorial plane." Kühr came up with the idea, "These circuli horarii in their first-mentioned meaning as temporary meridian distances should no longer be understood as parts of a position curve, but to make every single point in time determined by such a curve an ascendant again ”. A great circle is now drawn through 2 points of such a curve, ie the star or the relevant ecliptic point itself and the equator, which represents the “true astrological horizon of this star”; this has its own north and south points, its own meridian, its own SA (i.e. half the day or night arc) under its own distance from the celestial pole. So Kühr is an important step over Maginus and Placidus as well as over the English astrologer Wilson, Wordsdale, Dr. Simmonite et al., Who conducted “under the pole of the signifier”, went out. Because in the method of Placidus there is strict subordination of all inter-house points and directorates below the common horizon, which is why Placidus also uses the mere geometric expression “position circle” through the astrological term “similitudo situum ad cardines”, i.e. H. Similarity of the place in relation to the corner points of the horizon , or corner point analogy for short. With Kühr we are, so to speak, facing a federal state with independent horizons that are only held together by the proportionality of the same movement around the same celestial pole.

The term "secondary direction" was introduced by Placidus de Titis in the 17th century. As with the primary direction, the basis is the correspondence of day and year, but in contrast to it, that no arc is calculated here, but the actual celestial movements of a day are taken as a measure for a year. “The progressive horoscope is based on the assumption that the constellation of each day corresponds to a year of life. For example, one would read the influences of the stars in the 10th year of life from the horoscope on the 10th day after birth. ”The method of secondary direction, also called“ progression ”, is mainly used for the progressive sun and moon. Placidus himself describes the secondary directions in his Physiomathematica as follows: “By secondary directions I understand every movement that the stars themselves carry out according to the data of the ephemeris in those days after birth in which the foreordering of the principles of life is now with their natural aids (coeffectibus naturalibus) happens. The foreordering of heat and moisture occurs first of all from the two celestial lights, but insofar as these receive aspects from the other planets, the foreordering is supported and modified depending on the nature of the planets. "