The title of this article is ambiguous. For the Tibetan-Chinese singer, see Alan Dawa Dolma . 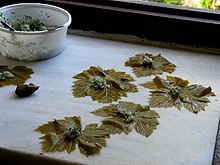 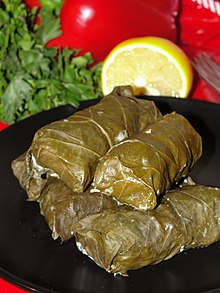 Dolma (taken from osm .: طولمه dolma / turk .: dolma ) is a specialty of oriental cuisine and refers to vegetables or grape leaves stuffed with rice or minced meat .

“Dolma” is the Turkish word for “filled” and is used for a variety of dishes with filled vegetables, such as the traditional summer mix of tomatoes, eggplants and peppers that are either baked or boiled.

For preparation, the stalks are cut off from fresh vine leaves, the leaves are blanched for a few minutes in boiling salted water and then placed on a sieve to drain. Some filling is placed on each vine leaf and rolled up. The stuffed vine leaf is boiled or braised in broth or wine and drizzled with olive oil and lemon juice. 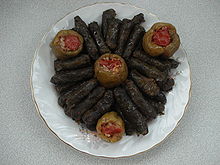