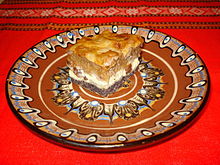 The Croatian cuisine is the national cuisine of Croatia . These include meat dishes, fish specialties, hearty soups, bacon , cheese , ham as well as local wine or herbal brandy (travarica).

How much the Croatian cuisine can be called original is controversial. The same applies to the Serbian or Romanian cuisine. The culinary "landscape" of Croatia has always been subject to change and, due to its diversity and heterogeneity, is often called the "cuisine of the regions", inspired and influenced by the former Ottoman occupiers (inland and east) and Austria - Hungary (north and north-west), while the cuisine of the coastal region is characterized by the influences of both the Greek, Roman and Illyrian as well as the modern cuisine of the Mediterranean, especially French and Italian .

The Croatian cuisine can, roughly summarized, be divided into a few regions in which very specific culinary traditions can be demonstrated that are characteristic of the respective region and that were initially not necessarily known in the rest of Croatia. Now, however, most dishes can be found across Croatia. Hence the name “regional cuisine” for the very diverse Croatian cuisine. Every area has something of its own. Paški sir (famous cheese, trademark of the island) comes from the island of Pag . The Karst areas produce the Dalmatian ham ( pršut ). In the Zagora area (inland Dalmatia ), simple dishes, bread, pork and potato dishes dominate. Inland cuisine is characterized by stews made from sauerkraut , cabbage , meat and bacon . Forest areas are known for hearty game dishes. 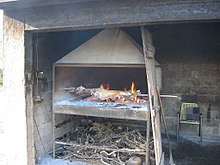 Lamb on a spit

Croatia is a country of coffee drinkers . This is u. a. due to the fact that it occupied a very important border position with the Ottoman Empire in the Austro-Hungarian monarchy . Everywhere in Croatia you come across traditional coffee houses based on the Viennese model. The most famous Croatian coffee producer is Franck . A method of making coffee that is widespread in Croatia is similar to that in Turkey: the coffee is boiled in a copper jug ​​with added sugar and served in small cups.

Croatia has a long winemaking tradition and today produces wines of various quality levels, although these are still little known internationally. The Croatian government plans to significantly enlarge the wine-growing areas before joining the EU.

In addition to a large number of imported international brands, there are also a number of domestic beers in Croatia.