This article covers the vegetable dish. For the animation film see Ratatouille (film) . 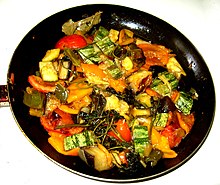 A ratatouille is a braised vegetable stew of the Provencal and Occitan cuisine and is one of the classic dishes such as the bouillabaisse fish stew or the strained fish soup à la Sétoise (in the Sète style ). The ratatouille is eaten hot or cold and traditionally served as a starter or intermediate course. It is sometimes used as an accompaniment to grilled or fried meat or fish that is served without sauce.

The most important ingredients of a ratatouille are aubergines , onions , zucchini , tomatoes , peppers and garlic , which are first cut into not too small pieces and then sautéed in oil (preferably in olive oil) and simmered with the lid closed. The individual vegetables are usually seared separately and gradually put together. Fresh or dried herbs from Provence are often added; they can be replaced with fresh parsley. The peppers can, the tomatoes should be peeled before cooking. Occasionally olives are mixed in at the end of the preparation, or a piece of air-dried ham or bacon is cooked from the beginning. Sometimes the pepper is left out. In everyday French cuisine, all the vegetables to be used are occasionally cut into pieces and cooked together with salt and pepper and a little oil in a pressure cooker without searing. 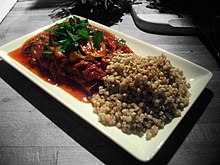 Variety of variations: Ratatouille with dried tomatoes and buckwheat

Since Mediterranean vegetables and their preparation are known throughout Europe today, the ratatouille is often prepared outside of southern France and is widely varied; the name ratatouille then indicates the method of preparation rather than a traditional composition. So instead of or in addition to the ingredients mentioned, a shot of red wine , a little celery , dried tomatoes , limes and / or capers can be added. In gastronomy and abroad, vegetables are often only braised briefly so that they still have bite; however, the typical ratatouille aroma does not develop.

Ratatouille is said to have originally been a purely local dish from the Nice area , which became popular beyond the region in the 20th century. The recipe is said to have been printed for the first time around 1930. The name ratatouille has been used in France for simple stews since the 18th century , derived from the verb touiller (to stir). The name may contain the Provencal word rata (simple food, porridge, poor people's food).

Heyraud, the author of La Cuisine à Nice , who is said to have been one of the first to publish the recipe, described the ratatouille as a ragout made from eggplant, tomatoes, zucchini and peppers. In addition to the name Ratatouille , it was also known as sauté à la niçoise and, especially in Nîmes , as bourbouillade .

In popular culture, the dish was given a prominent role in the film Ratatouille , in which a brown rat cooks the dish for a restaurant critic.